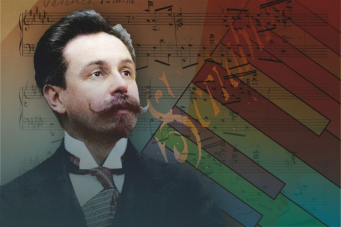 In 2022 the Russian music community celebrates the jubilee of the exceptional composer, Alexander Scriabin (1872–1915). The Primorsky Stage of the Mariinsky Theatre has timed the three-evening cycle of concerts “Scriabin – 150” to coincide with this event. The cycle encompasses all orchestral compositions by Scriabin.

On May 20 the second concert from the cycle “Scriabin – 150: All Composition for Orchestra” will be given in the Great Hall. Pavel Smelkov, a Principal Conductor of the Primorsky Stage, will conduct the Symphony No. 2 in C minor and Prometheus: The Poem of Fire. Ivan Kuligovsky, a Vladivostok guest pianist who was a prizewinner at many international competitions, will solo at the concert.

Alexander Scriabin is considered an outstanding composer, brilliant pianist, philosopher, and daring pioneer in music. He was the first person to include a color keyboard part in his scores and to introduce the idea of color music. For him, each tone or chord symbolized a color or color scheme. The composer aimed at joining opportunities of sound and visual arts; names of some compositions of his include images that relate to light or fire in one way or another.

Scriabin’s Symphony No. 2 expresses the main idea of the composer’s works: the man has to oppose evil, which he can subdue by his will.

Prometheus: The Poem of Fire is the last of Scriabin’s completed orchestral works. The poem is loosely based on the Greek story of Prometheus, whose image serves only as a symbol for Scriabin. According to the composer’s design, the whole harmonic-and-melodic pattern of Prometheus is deduced from a six-note chord that sounds at the very beginning of the poem. In the theory of music it is called “the chord of Prometheus”. In the final climax the chord of Prometheus turns into an exultant major triad that reflects symbolically the transformation of chaos into world harmony.

Pavel Smelkov, a Principal Conductor of the Primorsky Stage, reports on Scriabin’s works, “As the most brilliant exponent of the age, Scriabin began his career, drawing on the achievements of European romantic music. By the nonsensical close of his days, Scriabin could translate novel cosmic-scale images into music and reach the tightest form with his melodically harmonic idiom. I am sure that Scriabin’s music extraordinaire will strike a deep chord in the hearts of the Maritime Territory’s public and evoke emotions they has never felt, which combine astonishment, immersion and admiration.”