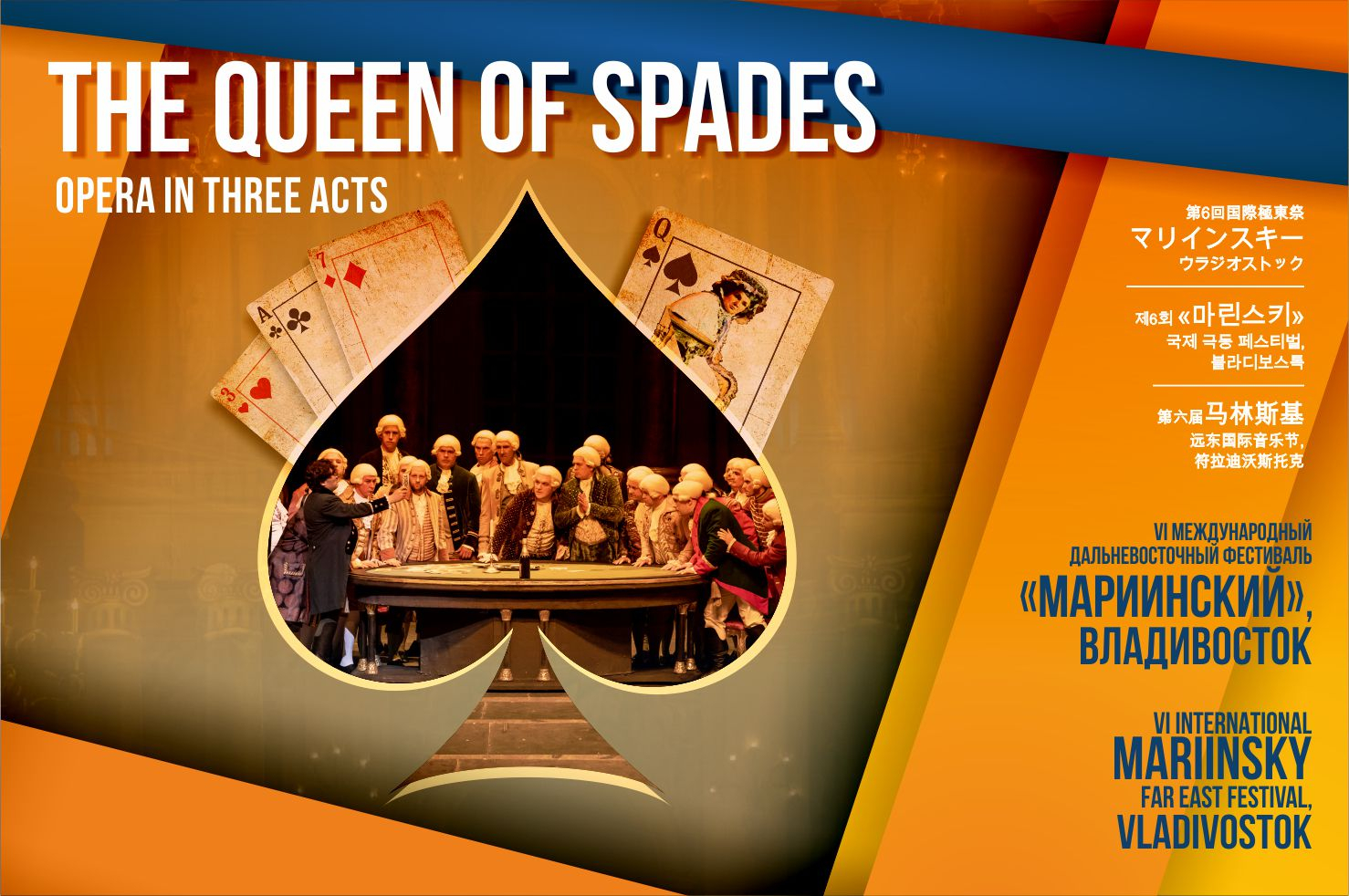 Act I
Scene 1
The Summer Garden in springtime. Two officers, Chekalinsky and Surin, are concerned about the fortunes of their friend Herman, who visits gambling halls every evening, despite the fact that he does not play because he is so poor. Herman turns up, accompanied by Count Tomsky, to whom he explains the reason for his strange behaviour: he is in love with a girl to whom he has not yet been introduced, and wants to win a large sum of money in order to marry her (“I do not know her name”). Chekalinsky and Surin congratulate the Prince Yeletsky on his forthcoming marriage. An old Countess is walking in the garden with the very girl whom Herman loves. Upon finding out that she is the Prince´s fiancée, he is deeply shaken. The women are frightened by his appearance (“I´m frightened”). Tomsky tells the story of the old Countess´ past in Paris. Count Saint-Germain showed her three winning cards. The officers laugh at Herman, and advise him to tempt fate while Herman vows to fight for his love.

Scene 2
Liza´s room. She is singing with her friend Polina (“Oh, what an evening”). Left alone, Liza reveals her feelings: the Prince loves her, but she cannot forget the passionate gaze of the stranger in the garden (“Where are these tears from?” “Oh, listen, oh, night”). As if he had heard her calling, Herman appears on the balcony. He threatens to kill himself because Liza is promised to another, and tells her that no-one loves her as passionately as he does (“Forgive me, heavenly creature”). The Countess enters, and Liza hides the love-struck Herman. Like a man possessed, Herman starts to search for the three cards. Having been with Liza, he realises he is happy only when he is with her.

Act II
Scene 3
A masquerade at the home of a high official. Yeletsky assures Liza of his love (“I love thee”). Herman continues to be haunted by thoughts of the three cards. A musical intermezzo-pastorale begins (“My dear little friend”). After it ends, Liza gives Herman a key to a secret door by which he can enter her room.

Scene 4
The Countess´ bedroom. It is night. Above the fireplace there is a portrait of the Countess in her youth dressed up as the Queen of Spades. Herman carefully enters the room. He vows to wrest the secret out of the old woman, even if Hell awaits him. Footsteps are heard, and Herman hides. Servants enter, and then the Countess, who starts getting ready for bed. Having sent the servants away, the Countess falls asleep in her chair. Suddenly, Herman appears before her (“Don´t be frightened! For God´s sake, don´t be frightened!”). On his knees, he begs her to name the three cards. The Countess, having risen from her chair, is silent. Then Herman points his pistol at her. The old woman falls. Herman sees that she is dead.

Act III
Scene 5
Herman´s room at the barracks. Liza has written to him to say that she is ready to forgive him, but Herman´s thoughts are elsewhere. He remembers the Countess´ funeral (“All the same thoughts, the same nightmare”). The ghost of the Countess appears before him. Out of love for Liza, she names the three magic cards for him: a Three, a Seven and an Ace.

Scene 6
On the banks of the Winter Canal, Liza waits for Herman (“Ah! I´m worn out, I´m tired”). From his words she understands that he is responsible for the Countess´ death, and that he has gone out of his mind. She wants to take him away with her, but he pushes her aside and runs away (the duet “Oh, yes, the sufferings are over”). Liza throws herself into the river.

Scene 7
A gambling hall. Tomsky is surprised to find Yeletsky, who is looking for Herman in order to exact revenge from him. The newly arrived Herman enters the game. Herman celebrates his victory (“What is our life, but a game!”). His winning streak strikes fear into everyone´s hearts. Yeletsky enters the game. Herman bets all of his winnings on the third card, but instead of an Ace, his hand comes up with the Queen of Spades. A shocked Herman sees the ghost of the Countess. She waits for his death. Herman dies, his last thought of Liza.

Yuri Temirkanov’s famous production of this opera has been a favorite for more than one generation of theatregoers. Recreation of the atmosphere of the Ekaterina’s times in all tiny details became the principal task for the director. Main signs of the northern capital, such as filigree iron gate and statues of the Summer Garden, magnificent ball at the nobleman palace, Winter Channel that pour Lisa jumped into, interiors of the historic barracks at the Mars Field and gambling house were recreated for this the most “Petersburg” Tchaikovsky’s opera. Grandiose work was done by the chief set designer of the theatre Igor Ivanov, who studied military uniforms, their affiliation to a particular regiment. This production had toured many countries with great success and received international acclaim as a classic example of opera direction. Every soloist’s dream is to take part in this production, since only the best were chosen.