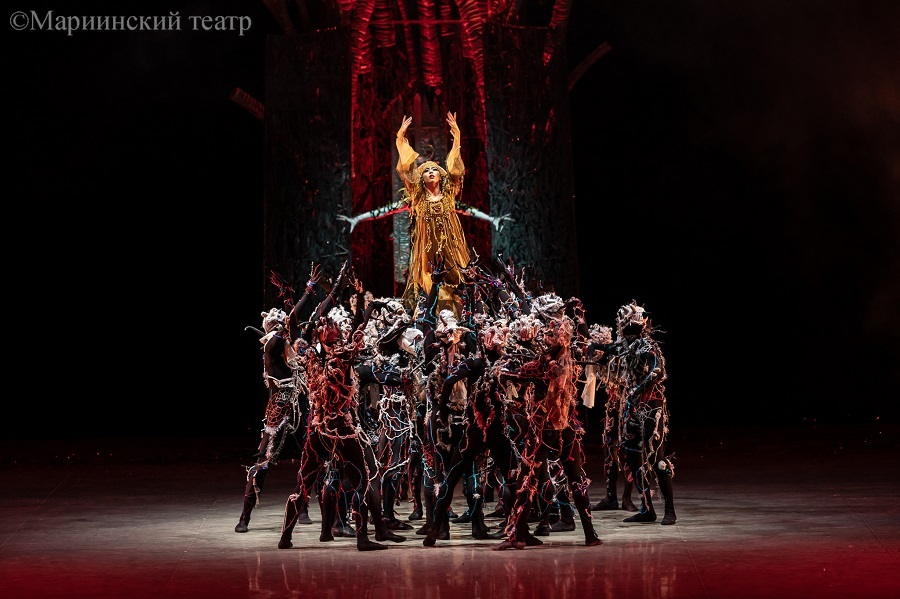 Scene I
On the eve of the Feast of Love girls weave floral wreaths for their chosen ones. Their activity is interrupted by the arrival of a group of carefree and cheerful young men, one of whom, Ivan, stands out for due to his poetic character. His lyrical mood is transferred to his friends, and soon the atmosphere is saturated with love and tenderness. The boys and girls pair up and dance. At nightfall, at the end of the festivities, they disperse. Ivan is left alone.

Scene II
Overcome by strange anxiety and a foreboding sense that he is about to encounter something unknown, Ivan ventures deeper into the forest. Suddenly the young man is blinded by a miracle of fire. Rushing in pursuit of the vision, Ivan finds himself in a beautiful enchanted garden. The fantastical creature was the unearthly beautiful Firebird.

Scene III
Ivan secretly watches the Firebird. Just as she is trying to pluck a golden apple from one of the trees, he leaps from his hiding place and takes hold of her. Hoping to gain her trust he plucks the golden apple himself, and offers it to the magic bird. However, the Firebird whips it out of his hand and disappears in the blink of an eye. In desperation, Ivan rushes off in pursuit of her again.

Scene IV
Still secretly pursuing the Firebird, Ivan finds himself in the realm of the immortal Kastchei. An astonishing scene unfolds before Ivan’s eyes revealing the secret of a terrible enchantment. Kastchei has cast a spell on the Princess, with whom he is in love, and turned her into his captive. Every night she must turn into a wonderful Firebird, and fly out to bring the hated Kastchei a golden apple. After greedily scoffing the apple, Kastchei returns to life and vigor and turns the Firebird into a lovely Princess and begins to beseech her love. This magic is repeated every night and will continue until the Princess accepts Kastchei’s love. Only then will he lift the spell.

Waiting until Kastchei’s kingdom goes to sleep; Ivan makes his way to the Princess and proposes that they run away. The Princess refuses. If the plan fails, the next night she must become a Firebird forever. Ivan is willing to fight the evil creature, but the Princess cautions him for she knows Kastchei’s secret: he can only be killed by a miraculous sword, which is kept at the head of his throne. Ivan, risking his life, climbs without a moment’s hesitation up on the throne, grabs the miraculous sword and cuts off Kastchei’s head. The spell is broken! Joyous celebrations! The beautiful Princess is free.

Scene V
The Princess and Ivan find themselves amongst their friends, and are as happy as can be.

The Firebird opened the historic triade of Stravinsky’s Russian ballets and brought him fame as a composer. Its libretto combined the themes of various fairy-tales and Ballet Master Eldar Aliev has chosen the same path. In his version the Firebird acquires the features of fantastic heroines of Russian operas and closely mirrors the image of the Princess-Swan from The Tale of the Tsar Saltan by Stravinsky’s teacher, Rimsky-Korsakov. She turns out to be an enchanted girl, helping Ivan Tsarevich defeat the evil magician Kashchei and his foul entourage. After Koschei’s death and the destruction of his kingdom, the wonderful bird turns into a beautiful Princess, who becomes Ivan’s bride. In his choreography Eldar Aliev retained the traditional juxtaposition between the kind terrestrial characters (princesses, Tsarevich’s retinue) and the distorted plastique of the dark forces. And the soloist was faced with the creative dual task of showing the transformation from a magical creature, embodying the fire element, into a Russian lyrical heroine.