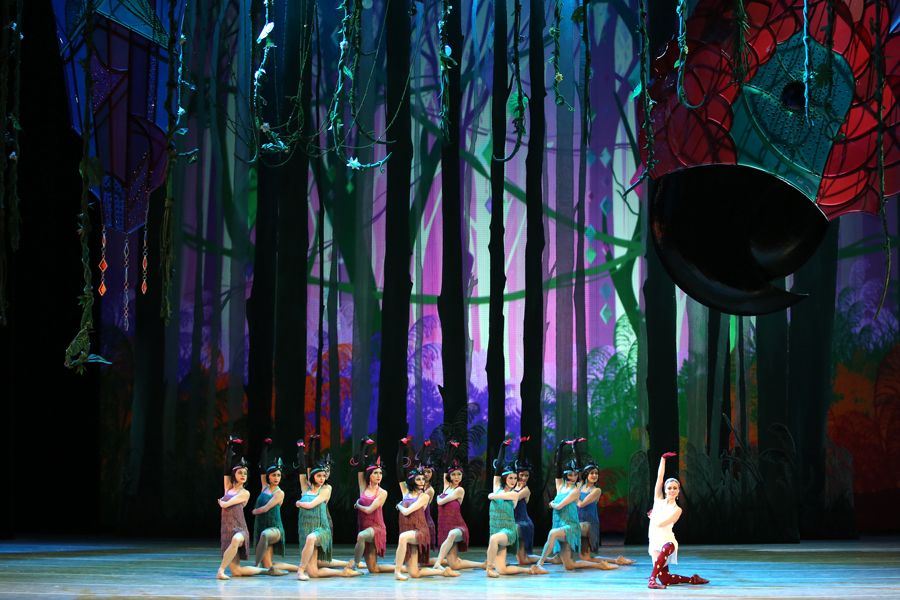 Little deer Gurri playing in the forest suddenly finds herself in an unfamiliar part of the forest — it is dark and mysterious. Yet Gurri likes to be alone. She plays around rolling in liana plants as if they were swings. She is joined by two other little deer — Boso and Lana. At once they see Gurri as their leader. The forest is not a boring green place anymore. It puts on bright colors. Just like any children the little deer are imagining themselves in a different world, making up adventures. The forest turns into the jungles. Immediately they see the master of the jungles – Tiger. He meets the little deer. Gurri is not afraid of him at all. The other deer make friends with the Tiger too.

Suddenly one of the lianas starts moving and turns into a snake. The snake is moving and the rings of its body rise up.

Now everything is bright and colorful in the forest. Other animals join the deer – a snake, a woodpecker, a jay, a leopard. Gurri, Lana and Boso never saw them before.

All of a sudden the Tiger leaves the game and listens to the forest. He feels the presence of strangers. Everybody notices his reaction and gets alert. They scatter and hide in lianas.

Strange unknown animals come around – they are people. They are having fun, not really caring about rules of the forest. All animals run away from the danger only the curious Gurri remains to observe the new wild guests.

Later a hunter shows up. As soon as the people saw him they begin to behave. But when the hunter turns around the fun goes even wilder.

The hunter notices Gurri. They meet. Now the people also notice her. They like Gurri and play with her. Gurri can’t repeat things that people show to her. She falls down and can’t get up. The people think it is funny. When they see that Gurri can’t get up, they lose interest and leave.

Gurri can’t get up. The hunter lifts her and carries her away in his arms. The Tiger jumps out and other animals follow him. They can’t find Gurri and think that she died. They leave.

Night falls. Leader Bambi is looking for his daughter. He finds her trace, follows it, and gets straight to the hunter. The hunter bows with respect and hands Gurri to him. Gurri can walk but she is too weak. Bambi takes her to the forest leaving her in a safe place in the grass. He scarcely disappears. Gurri is sleeping surrounded by fireflies who share their light with her and it cures her.

Birds twittering starts a new day. Gurri wakes up. She feels splendid. She is sneaking to a flock of birds and scares them off.

Other animals come. They are happy that Gurri is alive. The Tiger is happy that his new friend is safe and sound, yet at that very moment he feels danger and warns everyone! Everybody looks at where the people came from last time.

They all realize that the people are returning. The forest seems to feel the danger too – lianas go down to cover the animals. The tiger makes a sign and everybody hides in the lianas.

The people come out. They do not see anyone, push lianas from their way. They hit the liana that covers Gurri. Gurri stands right in front of them. The people get ready and one of them pulls out a rifle.

Gunshot! The hunter, who at the very last second covers Gurri, gets hit. At the moment when the hunter falls down, the Tiger and all other animals jump down from all lianas. The people and the animals are fighting. The people flee.

It is quiet and gets very dark. Gurri rushes to the hunter and cries. The fireflies appear. Just as they helped Gurri before they surround the hunter and revive him.

All animals are happy but the people are returning. First the animals have startled but this time the people have different intentions. They apologize to Gurri. Gurri forgives them… The peace is restored. Leader Bambi watches this from afar.

The new repertoire of the Mariinsky Theatre Primorsky Stage will have two one-act ballets for children — Bambi and In the Jungle. These shows have one thing in common — their story is based on the famous novel by Felix Salten Bambi, A Life in the Woods, a story of a little white-tailed deer, and its sequel, Bambi’s Children. The two ballets are performed on the same evening and meant as a family event. The performances are planned on Saturday and Sunday 25 so that parents and their children can spend this weekend together in the company of their favorite fairy-tale characters.

We invite you for the first opening of the new season which will be a true present for the young audience and their parents, and make their theatre visit an unforgettable family event.