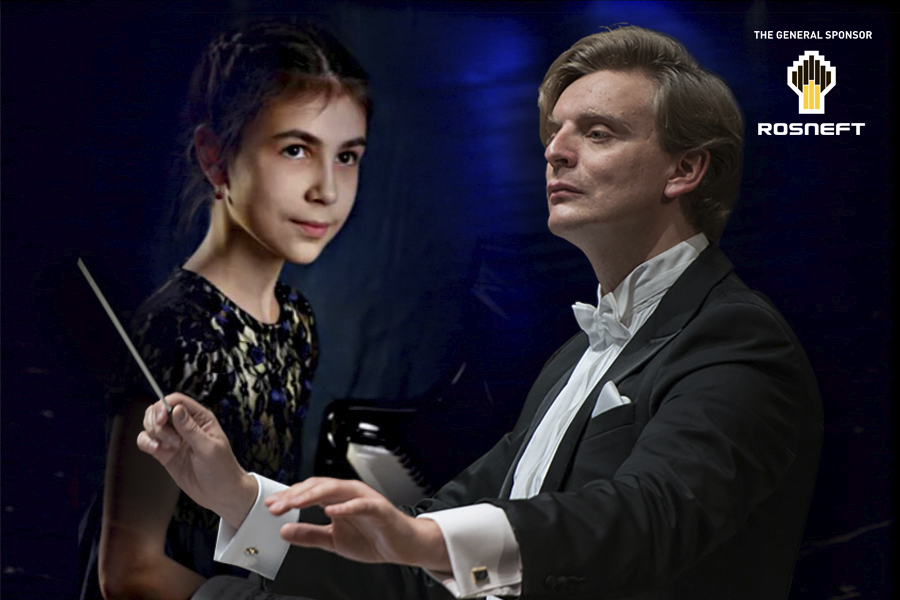 The Hebrides overture (Fingal’s Cave) was one of the first results of Felix Mendelsohn’s grand tour of Scotland in the summer of 1829. Having visited Walter Scott, the composer set off for the west coast and on 8 August he visited the islands of Iona and Staffa. “Fingal’s Cave” is located on the latter and was named in honour of the father of the legendary Celtic bard Ossian.
Mendelssohn hesitated for some time in his choice of the work’s name. One thing is beyond doubt: the work itself would never have appeared but for his impressions of the Hebrides and the Atlantic. There are barely thirty bars in the overture where the flow of the waves subsides. All the themes of the overture are born from flowing figurations that depict the surf of the ocean and they are in constant motion, changing their image. In some mysterious way this natural process in Mendelssohn’s hands emerges in true sonata form.

Mendelssohn was one of the most famous virtuoso pianists of his time. Even at the age of just 8 he could transpose the very sophisticated études of Cramer into another key right off the music sheet. Mendelssohn toured a lot and often included his Piano Concerto No. 1 into his programmes. This piece was very popular with the public at the time, but the composer himself scornfully dismissed it as ‘written in a rush.’
Piano Concerto No. 1 was written in Rome and Munich in 1831. While in Italy, Mendelssohn nurtured the concept in his imagination only. However, upon returning to Munich in October he finally wrote down the work in only three days. The composer was in a rush to write the orchestration, which is illustrated by the fact that the solo part is missing in the first version of the score. Mendelssohn was preparing for an important concert at the Odeon in Munich, which was a charity event for the poor. Ludwig I of Bavaria himself was in attendance. Featured soloist for the premiere performance on 17 October 1831 was the 17-year-old pianist Delphine von Schauroth, who the young composer was in love with (the concerto is dedicated to her). That same evening the composer conducted the premiere of his First Symphony.
After the dramatic first movement, the splendid Andante in E major (2nd movement) brings peace and calm. The solemn and yet restrained main theme is first sung by a chorus of violas and cellos until the piano reprises it. The reprise unites the orchestra and the pianist. The music landscape painted by them is filled with unspeakable beauty. The third movement is preceded by an unsettling fanfare, but the tension is lifted and it ultimately heralds an ebullient and energetic finale, filled with endless cascades of octaves for both hands.
The concerto, created by a pianist and for the pianists, is virtuoso and fitting at the same time. In December of 1831, Franz Liszt managed to play this then unfamiliar concerto in Paris straight from the sheet, making no mistakes to the delight of the author. Highly popular in the 19th century, Piano Concerto No. 1 was overshadowed by other works in the 20th century and was thus rarely performed. However, today its well-deserved popularity has come back.

“A huge symphonic composition in a new genre, by means of which I shall attempt to make a great impression on my audience,” was how Hector Berlioz (1803–1869) described the score of his Symphonie fantastique (1830), a clear manifesto of musical romanticism. The composer was not relying on the imagination of his audience, which had learned the classicist model of the symphony – from Haydn to Beethoven. And as well as the titles of the movements of the Symphonie fantastique he gave it a well-developed literary programme in which autobiographical motifs are reflected: the story of the young composer’s passionate love for the Irish Harriet Smithson, prima donna of an English theatre company on tour in Paris. In following the programme, the attentive listener will not miss the details of the plot of this musical “novella”, brilliantly brought to life by means of the symphony orchestra. The central image of the symphony, its idé fixe, is the theme of love which cements together the entire cycle. It appears in various forms – ranging from the dreamlike contours of a beautiful and desirable woman in the first three movements to grotesque and caricature in the final two. The Symphonie fantastique was first performed in Paris on 5 December 1830 under the baton of the composer.