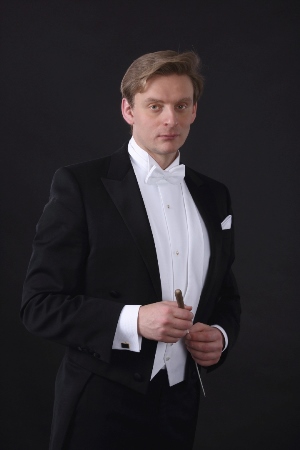 Anton Shaburov was born in Yekaterinburg and received his musical education in two major Russian conservatories. He graduated from the Ural Mussorgsky (2008, diploma with honors) and the Moscow Tchaikovsky (2011, diploma with honors) Conservatories studying conducting with the legendary professor Gennady Rozhdestvensky. In 2016, he completed an assistant traineeship programme at the Moscow Tchaikovsky Conservatory.

In 2008-2017, Anton Shaburov worked in the Ural State Mussorgsky Conservatory (Yekaterinburg) where he combined his activities as a principal conductor and artistic director of its Symphony Orchestra with teaching at the Chair of Orchestra Conducting. During his work as principal conductor Anton Shaburov organized more than 40 concert programs and several festivals dedicated to Rachmaninoff, Liszt, Tchaikovsky, Shchedrin, Vladislav Zolotaryov. Under his guidance, the Orchestra prepared the world premiere of Violin Concerto No. 1 by Mikael Tariverdiev (soloist - the Honoured Artist of Russia Graf Murzha).

In August 2016, the Symphony Orchestra of the Ural Conservatory under the baton of Anton Shaburov faced its highest triumph in the Konzerthaus Berlin at the Young Euro Classic 2016 festival. The performance of the Russian program was a tremendous success with the audience and was very warmly received by the German and Russian musical press.

In 2010, Anton Shaburov made his opera debut as music director of Puccini’s opera Gianni Schicchi at the Opera Theatre of the Ural State Mussorgsky Conservatory. For this work he was honoured with Sverdlovsk Region Governor’s award “For outstanding achievements in the field of literature and arts.” During his work in the Opera Theatre of the Urals State Mussorgsky Conservatory Anton Shaburov became music director of such productions as Orff’s Die Kluge, Stravinsky’s Mavra and The Nightingale, Eugene Onegin by Tchaikovsky, The Noblewoman Vera Sheloga by Rimsky-Korsakov, Duenia by Sergei Prokofiev.

Since 2012 he has been collaborating with the Yekaterinburg State Academic Opera and Ballet Theatre as guest conductor.

Since 2015 Anton Shaburov has been Permanent Guest Conductor of the Omsk Chamber Orchestra. In August 2017, Anton Shaburov was named principal conductor and artistic director of the Far East State Symphony Orchestra (Khabarovsk, Russia).

For more detailed information on the artist please use the official website www.antonshaburov.com