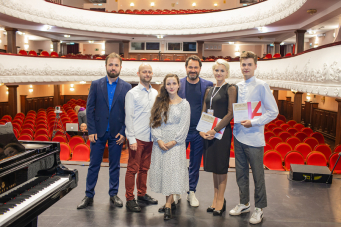 On September 9, 2022 the renowned bass Ildar Abdrazakov gave a master class for the first time at the Primorsky Philharmonic Hall in Vladivostok as a part of the V Ildar Abdrazakov International Music Festival. The Festival was founded in 2018 and is one of the greatest and dynamically developing musical forums in Russia aimed at indication, support and promotion of talented opera singers throughout the country.

According to the results of the auditions, candidates from various towns and cities of Russia had been invited to take part in the master class. Among them were the opera soloists of the Primorsky Stage of the Mariinsky Theatre Ilya Astafurov and Alina Mikhailik as well as the student of the Vocal Department of the Far Eastern State Institute of Art Alena Denisenko. Accompanied by Evgeny Sergeev, each singer performed an aria or romance by a Russian or foreign composer and further worked out the composition in details with Ildar Abdrazakov.

It should be noted that besides the Festival, Ildar Abdrazakov has twice appeared at the Primorsky Stage of the Mariinsky Theatre within the framework of the cultural program of the VII Eastern Economic Forum, which was held in Vladivostok from September 5 to September 8, 2022. On September 7, 2022 the soloist performed one of his greatest parts – Boris Godunov in the legendary opera Boris Godunov by Modest Musorgsky. The Mariinsky Orchestra of the Primorsky Stage was conducted by Pavel Smelkov, Principal Conductor of the Primorsky Stage. Later that evening Ildar Abdrazakov gave his solo concert. The singer performed famous arias from operas by Russian and foreign composers, accompanied by the Russian National Youth Symphony Orchestra under the baton of Alexey Rubin.