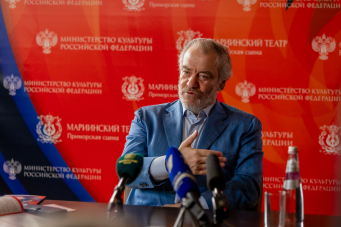 On August 3, 2022 Valery Gergiev, Artistic and General Director of the Mariinsky Theatre, gave a media conference at the Primorsky Stage. His meeting with journalists was dedicated to the VII International Mariinsky Far East Festival, which had been held in Vladivostok since July 28, 2022.

The maestro told the journalists about the Festival program, further plans for developing the Primorsky Stage and the resumption of cooperation with countries of the Asia-Pacific region.

“We have good artistic connections in Japan and in South Korea and in the People’s Republic of China. I have been in Japan more than 100 times and in China about 50 times. […] I believe that there are perfect artists in China and in Korea and in Japan, and we collaborate with them, and this collaboration will never end,” the maestro stated.

The vast Festival opera program of this year encompasses some significant titles included in the golden fund of Russian opera. Valery Gergiev told about plans to shift some of those productions to the Primorsky Stage, since the Theatre has artistic powers to perform them.

“I want Mazepa to be presented in Vladivostok. No doubt, I would like A Life for the Tsar to be performed here. In November 2021, we appeared here to perform the opera Khovanshchina by Musorgsky. The roles were performed by singers from Saint Petersburg and Vladivostok. It is especially important that the opera continued its life here – it has been subsequently wholly performed by the Primorsky Stage singers.”

While speaking about the premieres of Boris Godunov on August 4 and August 6, 2022, the maestro reminded that the title part would be performed by Ildar Abdrazakov, one of the best basses in the world.

“This is the second Ildar’s visit to Vladivostok. This event is very important. He will offer us his very strong interpretation of the main hero. His companions on the stage will be good, too. The main point is that the opera will be performed in Vladivostok. This production should also live here. Primorsky Stage has its orchestra and chorus, which have already proved themselves perfectly during the first two performances of Khovanshchina.”

During the media conference, the maestro paid his attention to the matter of forming a repertoire of the Primorsky Stage.

“Our task is to prepare, as soon as possible, literally within two or three years, a repertoire for the Primorsky Stage so that it will include the main opera titles representing primarily the Russian opera tradition as well as the European – Italian, French, German and Austrian – traditions. Our Theatre should get ready to be fit for the interesting, fertile, various repertoire by the time when the big international cultural center is opened in Vladivostok.

Now Valery Gergiev turns his focus (and that of the Mariinsky Theatre) towards “giving more to the regions”. He noted that nowadays it was very important to appear before the Russian audience notwithstanding a distance to any locality.

“One of the primary tasks is to help all Russian generations, especially the youngsters, in sensing what country they live in, and this task is very important. Notwithstanding the political situation in the world, the greatness of any country is always determined by its cultural past, present and future. By now, Russia has the cultural future. The culture begins, sooner or later, to affect the politics, and takes the priority,” the maestro stressed.