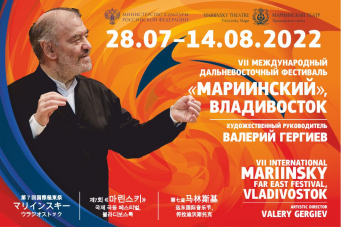 The program of the VII International Mariinsky Far East Festival, Vladivostok, has been announced

From July 28 to August 14, 2022, the VII International Mariinsky Far East Festival, Vladivostok, will be held at the Primorsky Stage of the Mariinsky Theatre. The Festival will start on July 28 and July 29, 2022 with Sergei Prokofiev’s ballet Romeo and Juliet based on William Shakespeare’s world-renowned tragedy. Having learned Verona chronicles and descriptions of old dances, the choreographer Leonid Lavrovsky chose a dramatically colorful pantomime dance as the main means of expression. The collaboration of Leonid Lavrovsky and the set and costume designer Pyotr Williams has been fruitful to give one of the best visual translations of Prokofiev’s music.

The parade of opera stars to be featured both in new and repertoire performances is expected at the Primorsky Stage. On August 1, 2022 the opera part of the Festival will open with Mozart’s vividly cheerful opera Le nozze di Figaro based on Beaumarchais’s comedy of the same name. It is important to note that in 2017 at the II International Mariinsky Far East Festival, Vladivostok, the Primorsky Stage audience had the opportunity to enjoy the Mozart’s beautiful opera classically staged by Yuri Alexandrov, People’s Artist of Russia. This year the new production of the Mozart’s masterpiece will be presented. The opera has been staged by Alexander Petrov, People’s Artist of Russia, Artistic Director of the Saint Petersburg  Children’s  Musical  Theatre  Zazerkalye.  The  scene  is  shifted  to  the  beginning  of the 20th century, to the modern era. Le nozze di Figaro is a comic opera; however, there are quite serious themes of honor, love and social ladder hidden behind its cheerfulness. Up to the present day, the opera is the most popular one in the repertoire of almost every opera house in the world and arouses admiration of an audience of millions. The primary roles will be performed by soloists of the Mariinsky Theatre such as Vadim Kravets, Anna Denisova, Yekaterina Solovyova, and Vladimir Moroz. The baton will be held by Justus Frantz, a globally known musician and a Grammy awardee, who has also received many other prestigious prizes.

The opera stars Stanislav Trofimov, Aigul Khismatullina and Ivan Gyngazov will appear in the primary parts in Mikhail Glinka’s historical drama A Life for the Tsar, which will first be performed in Vladivostok on August 2, 2022. The story of the achievement of a simple peasant from Kostroma, who sacrificed himself in order to save the life of Tsar Mikhail Fyodorovich and rescue Russia from foreign invaders is perfectly suitable for an expansive and heroically patriotic drama; in the plot there is war, there is love, there are scenes of folk life and the are ball scenes with gorgeous ballet. The Stage Director Dmitri Tcherniakov has ventured to alter the ideological accents, revealing in the opera problems of civil society, human rights, personal responsibility and collective morality. The Mariinsky Orchestra will be conducted by maestro Valery Gergiev.

On August 3, 2022 the production of Sergei Prokofiev’s opera Semyon Kotko, a recipient of the Golden Mask prize, will be performed by renowned soloists of the Mariinsky Theatre such as Sergei Semishkur, Yevgeny Nikitin, Andrei Serov, Zhanna Dombrovskaya, Vadim Kravets, and Yekaterina Solovyova. The composer has chosen shrill and piercing musical language to describe realities of civil war. The story of Semyon Kotko, a soldier who returns from the war to see the enormous devastation instead of his own home, as well as the apocalyptic atmosphere, love and exploit – all this is reflected in the opera staged by Yuri Alexandrov, People’s Artist of Russia. The baton will be held by Valery Gergiev.

The world-renowned bass Ildar Abdrazakov, one of the most sought-after contemporary opera singers, will perform the title role in Modest Musorgsky’s Boris Godunov on August 4 and August 6, 2022. The star bass will perform together with leading soloists of the Mariinsky Theatre such as Stanislav Trofimov, Sergei Semishkur, Yevgeny Akimov, Andrei Serov, and Mikhail Kolelishvili as well as soloists of the Primorsky Stage such as Vyacheslav Vasilyev and Laura Bustamante. The Mariinsky Orchestra will be under the baton of maestro Valery Gergiev. In Vladivostok, the initial opera version written by Musorgsky in 1869 will be performed. The operatic dramaturgy is aimed at interpreting the tragic image of Tsar Boris Godunov, the suffering man who has taken up the heavy burden of state power. For the first acquaintance of the audience with the Modest Musorgsky’s masterpiece, the production based on the well-known play by Andrei Tarkovsky will be presented. Sergei Bogoslavsky acts as an Adaptation Director of the production for the Primorsky Stage. The video projections are prepared by the Chief Designer of the Primorsky Stage Pyotr Okunev. Irina Soboleva, Honored Artist of Russia, Artistic Director of the Opera Company of the Primorsky Stage, is in charge of musical preparation.

On August 5 and August 8, 2022 one of the best-known and frequently performed operas by Verdi – Aida staged by Alexei Stepanyuk, Honored Art Worker of Russia – will be presented in the Great Hall of the Primorsky Stage. The opera story unfolds in Egypt in the times of pharaohs; however, in the first place there is a personal drama, namely: the forbidden love between Aida, an Ethiopian slave, and Radamès, an Egyptian warlord. On August 5, 2022 the primary parts will be performed by soloists of the Mariinsky Theatre such as Anna Kiknadze, Irina Churilova, Ivan Gyngazov, Yevgeny Nikitin, and Vladislav Sulimsky. On August 8, 2022 the role of Aida will be performed by Tatiana Serzhan and the role of Amonasro will be sung by Ariunbaatar Ganbaatar. The baton will be held by Valery Gergiev on August 5, 2022 and Pavel Smelkov, Principal Conductor of the Primorsky Stage, on August 8, 2022.

On August 6, 2022 the Vladivostok audience will enjoy the provocative Middle Ages, spectacular Spain castles, violent passions and an excellent vocal ensemble of four central characters. Soloists of the Mariinsky Theatre such as Tatiana Serzhan, Anna Kiknadze, Ivan Gyngazov, and Ariunbaatar Ganbaatar will appear as the beautiful noble lady Leonora, the passionate gypsy Azucena, the brave troubadour Manrico, and the cruel Count di Luna in Giuseppe Verdi’s Il trovatore. This one of the most popular operas in the international repertoire has been staged by Pier Luigi Pizzi. This is a story of the struggle in which there is no winner, and, regardless of the somber plot, the audience will be able to keep Verdi’s eternally beautiful music in memory. The Orchestra will be conducted by Valery Gergiev.

Vladislav Sulimsky, one of the most recognized contemporary baritones, a winner of the Casta Diva Award, will again thrill the Festival’s audience on August 7, 2022. He will perform the title part of Hetman Mazepa in Pyotr Tchaikovsky’s Mazepa. In November 2020 the Primorsky Stage presented the opera in concert on the occasion of the 180th anniversary of the composer’s birth. Now the public will be able to enjoy one of the Mariinsky Theatre’s most famous operas as a whole. The Stage Director Ilya Shlepyanov and the well-known Soviet Set and Costume Designer Alexander Konstantinovsky have created a grand standard of the serious style appropriate for Tchaikovsky’s opera music. Mazepa is a long-lived performance; it – as well as its title character – has not yet lost its charisma or power. Soloists of the Mariinsky Theatre such as Stanislav Trofimov, Anna Kiknadze and Irina Churilova will also take part in the performance. The baton will be held by Valery Gergiev.

On August 14, 2022, the final day of the Mariinsky Festival, the joint composition of soloists of the Mariinsky Theatre and the Primorsky Stage, as well as the chorus and orchestra of the Primorsky Stage under the baton of Pavel Smelkov will perform Giacomo Puccini’s Turandot, one of the operas most frequently staged all over the world. Turandot is a drama of violent passions, which unfolds on the picturesque background and which is a fanciful combination of Oriental gorgeousness with bloody violence and reality with symbols. The lyrical ariosos reflecting main characters’ feelings and the grandiose crowd scenes with the powerfully singing chorus will be the final highlight of the VII International Mariinsky Far East Festival, Vladivostok.