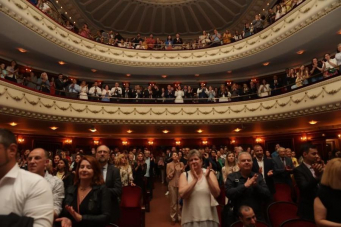 Eldar Aliev has staged A Thousand and One Nights in Bulgaria

From May 27 to June 1, 2022, Fikret Amirov’s ballet A Thousand and One Nights was premiered at the National Opera and Ballet of Bulgaria. The ballet production has been choreographed by Eldar Aliev, Ballet Artistic Director of the Primorsky Stage of the Mariinsky Theatre.

The premiere is timed to coincide with the Independence Day of the Republic of Azerbaijan, the celebration of the 30th Anniversary of Establishment of Diplomatic Relations between Azerbaijan and Bulgaria, and the 100th anniversary of the birth of Fikret Amirov, an outstanding Azerbaijani composer.

In Bulgaria, the ballet A Thousand and One Nights was designed by Semyon Pastukh (sets) and Galina Solovieva (costumes). Initially, the premiere was to be released in March 2020. Due to the pandemic, it was transferred to May 2022. The premiere cast included Marta Petkova as Scheherazade, Yekaterina Chebykina as Nurida and Tsetso Ivanov as Shakhriar. The ballet was musically directed by Ayyub Guliyev, Principal Conductor of the Azerbaijan State Academic Opera and Ballet Theater. The press has noted a success at all performances and tremendous welcome.

The ballet A Thousand and One Nights was first staged by Eldar Aliev in Indianapolis Ballet Theatre in 1994. It was a great success, and Wall Street Journal called it the best ballet of that year in America.

In Vladivostok, at the Primorsky Stage of the Mariinsky Theatre, A Thousand and One Nights was premiered in August 2020. The ballet was represented with renovated choreography by Eldar Aliev, its sets and costumes were redesigned by Pyotr Okunev. The Primorsky Stage Ballet often appeared with that ballet on tour at the Mariinsky Theatre in Saint Petersburg. In May 2021 the Primorsky Stage Ballet opened the XXXIV International Rudolf Nureyev Classic Ballet Festival in Kazan with two performances of A Thousand and One Nights on the stage of the State Opera of Tatarstan.