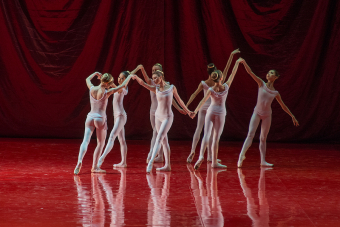 In 1986, in Dallas, the legendary Danish choreographer Flemming Flindt staged Phaedra tailoring the ballet for his wife Vivi Flindt, a Danish ballet dancer. At that time he was inspired by characters of the tragedy by Euripides, an ancient Greek dramatist. The plot focuses on Phaedra’s longing for her stepson. Phaedra unbosoms herself to Hippolytus to be rejected by him. The tragic ending is inevitable.

To recreate the rarely performed ballet Phaedra at the Primorsky Stage of the Mariinsky Theatre was an initiative of Eldar Aliev, a Ballet Artistic Director. Jacob Sparso, a Danish assistant choreographer who first performed the role of King Theseus’s son Hippolytus, staged the ballet. Pyotr Okunev, a Chief Designer of the Primorsky Stage of the Mariinsky Theatre, embodied the conception of Beni Montresor, an Italian artist and set designer. All lighting solutions were developed by Toni Tucci, an American lighting designer who is well known to the international scenic community, in particular, for his ballet designs.