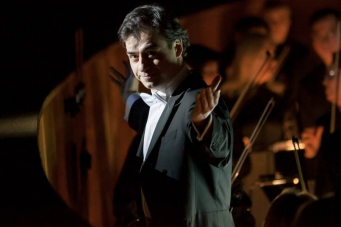 On April 22 and April 23, 2022 the maestro conducted at the premiere performances of the well-known opera Madama Butterfly by the Italian composer Giacomo Puccini, after David Belasco’s drama of the same name. The opera was directed by Mariusz Treliński and designed by Boris Kudlička.

Vladislav Karklin is a prizewinner at many international competitions. He graduated with honors from the St. Petersburg Conservatory (clarinet class of Professor Adil Fyodorov). He attended the symphony conducting class of Professor Ilya Musin, and in 2000 he trained under Professor Alexander Titov. He completed with honors his postgraduate clarinet studies at the Robert Schumann Hochschule für Musik in Düsseldorf in 1997 and his piano and symphony conducting studies in 2002.

Between 2005 and 2009 Vladislav Karklin was Deputy Principal Conductor and Artistic Director of the Stadttheater in Passau (Germany). He served as Guest Conductor of the St. Petersburg State Academic Symphony Orchestra from 2009 to 2011 and worked as a conductor at the Staatstheater Darmstadt from 2010 to 2013. He collaborates with the Greater Anderson Musical Arts Consortium (USA), the Mikhailovsky Theatre, the Yekaterinburg Opera and Ballet Theatre, the St. Petersburg Philharmonic, Moscow’s Helicon Opera, and others.

On April 27, 2022 Vladislav Karklin is to conduct at the third premiere performance of Madama Butterfly opera in Vladivostok.