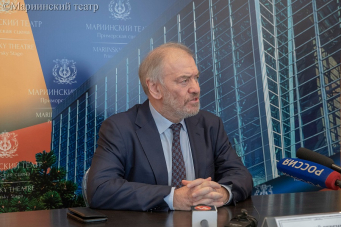 On November 20, 2021, the Primorsky Stage of the Mariinsky Theatre hosted a press conference of the People’s Artist of the Russian Federation, Artistic and General Director and Principal Conductor of the Mariinsky Theatre, Valery Gergiev. Maestro told the journalists about his repertoire plans for the next season, and also spoke about the preparations for the first Vladivostok performance of one of the most grandiose Russian operas, Khovanshchina by Modest Musorgsky.

“The huge team of the Theatre continues to work non-stop to implement the most important task: dynamic entry of the outstanding opera and ballet repertoire into the lives of the Primorye audience. In particular, new productions will be staged, such as Ruslan and Lyudmila, Boris Godunov, Mazepa, and, perhaps a little later, The Maid of Orleans”, Valery Gergiev pointed out.

The Artistic Director said that the Theatre would commensurate the number of new operas with its capabilities. So far, four or five titles per year are planned, three of which will be presented in Vladivostok in the near future. “In a very short time, the Primorsky Stage of the Mariinsky Theatre has become one of the best opera houses in the world. The strongest evidence is the Khovanshchina production that you are going to watch today. Only a few theatres in the whole world can afford to perform such a gigantic opera canvas”, the maestro emphasized.

Let us remind you that the initial performances of Khovanshchina in Vladivostok took place on November 19 and 20, 2021 and came off with great success. The performances were jointly prepared by the companies of the Mariinsky Theatre (St Petersburg) and the Primorsky Stage. “Performance of the soloists of both Theatres on the same stage is a normal, healthy process. As we go forward, this process of theatrical cooperation will be enriching both Theatres more and more, thus allowing us to tackle the super popular opera and ballet titles”, added Valery Gergiev.

The next three premiere performances of Khovanshchina with the participation of the leading soloists of the Primorsky Stage of the Mariinsky Theatre are scheduled for December of the current theatrical season. “I would like this opera to take root on the Primorsky Stage”, Maestro admitted, adding that Khovanshchina has been adorning the repertoire of the Mariinsky Theatre for many years.

Among the important tasks Valery Gergiev also named the formation of children’s repertoire and noted the recent Primorsky premieres of operas for the very youngest. The maestro introduced the new Artistic Director of the Opera Company of the Primorsky Stage, Honoured Artist of Russia, leading Concertmaster of the Mariinsky Theatre in St Petersburg, Irina Soboleva.

When asked about the restrictions imposed on the Theatre by the pandemic, Maestro Gergiev replied: “There are always difficulties, and we have to overcome them without many words. The Mariinsky administration, despite any hardships, will do their best to ensure that the Theatre remains strong, healthy and attractive for the audience”.

During his visit to Vladivostok, Valery Gergiev also visited the construction site of the cultural and educational center which is being erected at the request of the National Cultural Heritage Foundation for Social and Cultural Projects. This Center, in addition to branches of the country’s largest museums, is going to house another new stage of the Mariinsky Theatre. The grand opening is scheduled for late 2023. “We are at the beginning of a journey that will make Vladivostok a major center for opera and ballet traditions. Everything that we are doing for Primorye now, we are doing EXACTLY for Primorye”, summed up Maestro Gergiev.