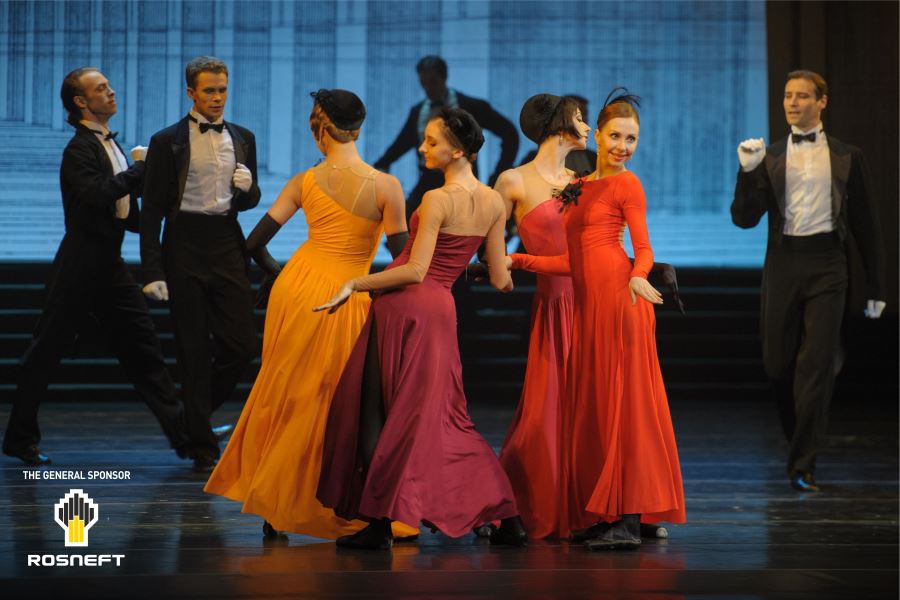 Act I
A room in Cinderella’s Father’s house. Her Stepmother, a capricious and arrogant woman, and her two daughters Kubishka and Khudishka, are occupied with preparations for the ball. The hairdressers are styling their hair. The kind and polite Cinderella, wearing an old dress, is the image of her dead mother.
She is busy with the dirtiest household tasks. Once alone, Cinderella mourns the past, remembering her happy childhood days. Her Father appears and Cinderella throws her arms around him. He, however, has come in drunk with his drinking companions to ask his daughter for money. The Stepmother appears and launches a tirade of abuse at her husband. Cinderella is alone once more. Suddenly, an old tramp appears. Cinderella pities her. The final preparations for the ball are being made. The dance teachers arrive.
They rehearse with Khudishka and Kubishka, but the slow-witted Sisters are unable to learn the steps. Cinderella observes the lesson.
The Stepmother and the Sisters depart for the palace. Cinderella waltzes dreamily, thinking up her own dance for the ball. The old tramp appears again; she is, in fact, a Fairy and has come to reward Cinderella’s kindness.
She presents her with a pair of glass slippers and a dress that she removes from her heavy bags. The Four Seasons appear and help with Cinderella’s transformation.
The Fairy warns Cinderella that the effect of the magic charms will cease at midnight.
If Cinderella does not leave the palace on time, she will instantly find herself dressed in dirty rags again.

Act II
The ball at the palace is in full swing. The Stepmother and her daughters arrive. Kubishka, Khudishka, the Stepmother and all the ladies try to attract the attention of the Prince. Unexpectedly, an unknown figure appears. The Stepmother and the Sisters do not recognise Cinderella.
The Prince is enchanted by her. Her every movement delights the court.
The hall empties; the Prince and Cinderella are left alone. Cinderella, carried away by the fact that her dreams have come true, suddenly remembers about the time. The clock begins to chime midnight. Cinderella runs from the palace and, in her haste, loses one of the slippers. The Prince and the guests rush after her, but she disappears. The Prince picks up the tiny slipper – it will help him find the mysterious beauty.

Act III
The court ladies of the kingdom are in despair; the slipper is too small for their feet. The Prince leaves to search the world for the unknown girl. Early in the morning Cinderella is dozing in her corner of the house. After waking up, she remembers the previous night. If it were not for the slipper she unexpectedly finds, the whole thing could have been a dream. The Sisters appear. Naturally, they once again begin to quarrel.
Cinderella tries to part them, but the Stepmother enters and falls on her.
Unexpectedly, the searchers rush in, looking for the girl who lost her slipper at the ball. The Prince arrives. None of the girls there remotely remind him of his mysterious beauty. In vain Kubishka and Khudishka try to squeeze their foot into the tiny slipper. Then the Stepmother decides to try it on. Cinderella, hidden in her corner, drops the other slipper. The startled Prince looks at Cinderella and recognises the girl he has been looking for. The Fairy-Tramp puts the slippers back in her bag. They have served their purpose here, but they will come in handy somewhere else…

Cinderella marked Alexei Ratmansky’s debut in the genre of the multi act plot ballet; previously he had only staged oneact ballets and miniatures. And Ratmansky, unlike many predecessors who staged this ballet, proposed an interpretation of Prokofiev’s immense score rather than the plot of the familiar fairy-tale. Leaving the sugary-sweet children’s tale “about the right of all to happiness who have a kind heart” in the past, he takes his heroine out of any specific time but places her within an atmosphere with everyday objects where miracles are achieved not by a beautiful fairy but by a business-like old bag lady with a sack of oranges and a retinue of quarrelsome punks. Ratmansky together with Valery Gergiev, Ilya Utkin, Yevgeny Monakhov and Elena Markova set the depth of Prokofiev’s masterpiece, its notes of anxiety and joie de vivre with post-modernistic ease in this ironic ballet. He appeared as a choreographer at whose ballet the audience laughs and the dancers, submitting to the nature of the acting, reveal new performing qualities and play the fool from the depths of their souls. Cinderella’s sisters, for example, play the fool enacting a boxing match and in a mock sumo wrestling fight. And in the ball scene the ballet-master-story-teller plays the fool also: devoid of any pathos, he dispels the pathos of the fairy-tale quality. Recreating the irony that imbues Prokofiev’s musical theme, he devised a parody of the traditional fairy-tale image of Court life: high society “lions” and “lionesses” awkwardly move from one foot to another, the ladies affectedly shaking their wrists and the gentlemen powerfully bending their torsos, with deep pliés crossing the stage in a mazurka.