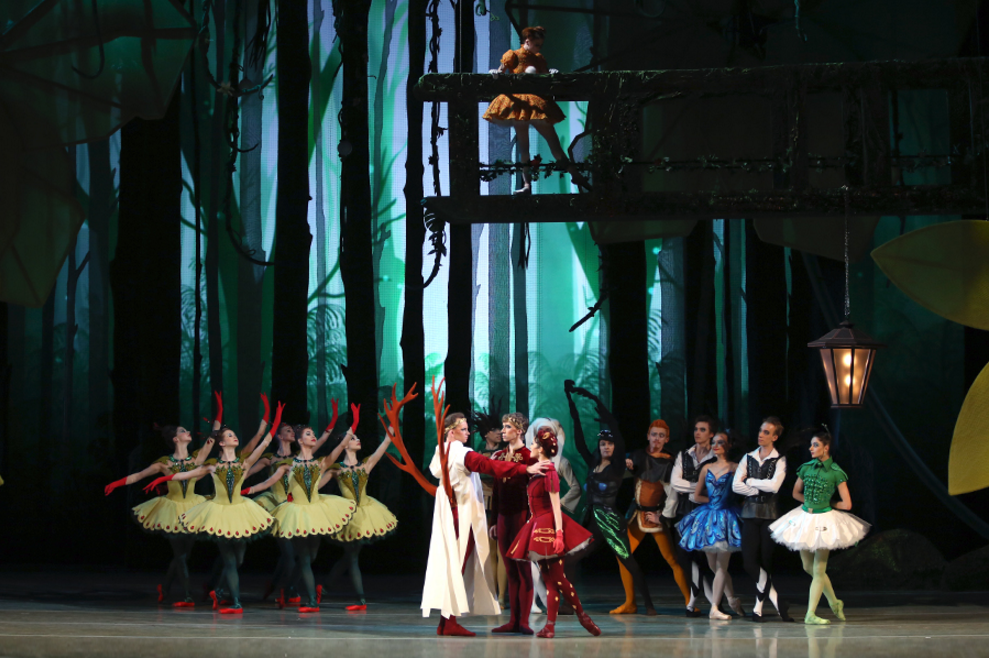 In a secluded corner of the forest in a dark grove Bambi the young deer has been born. Still barely an infant he is already standing, trembling on his legs. The different sounds of the forest startle him. He takes one step and then another and joyfully leaps through the woods. His mother tenderly watches her son.

Each deer is a prince by birth, and the residents of the forest are keen to meet the new prince. While playing, Bambi bumps into the Hedgehog who curls up into a ball. He is initially annoyed, but then graciously welcomes the young deer. A beautiful butterfly flies past in haste — Bambi really wants a closer look! The polite and well-brought-up Hare starts a conversation with the young prince. Bambi makes friends with the timid Squirrel, the Beetle, the Grasshopper and the haughty Fox — so many acquaintances... But suddenly his heart freezes with joy – he sees other deer just like him. It is the beautiful Falina and the noble Ronno. The young deer make friends, moving across the meadow and chasing each other. The playing children are watched by an elderly stag. He keeps his eyes on Bambi — his son — and then disappears behind the trees. Bambi carefully watches the Old Leader and only a nut dropped by the Squirrel rouses him from his torpor.

Spring and summer pass in carefree games. The children mature and emerge into powerful adolescent deer. Bambi keeps an increasingly keen eye on Falina; he really likes her. But he’s not the only one who likes her.

Winter follows autumn and the ground is deeply covered with snow. There is no more time for play – the whole day is spent looking for food. While seeking out moss or other withered grasses the deer dig the snow with their hooves. On one such gloomy day Bambi hears a terrifying noise – it is the shot of the Hunter’s gun. In panic the beasts plunge into the undergrowth and Bambi’s mother is left lying alone in the snow. Bambi runs to her to help, but he sees that Falina is in danger — the hunter as aimed his gun at her. Infuriated, in one powerful leap he kicks his enemy down and saves his friend. But at the same time the hunters take his mother away. Bambi will never see her again.

One day all that was bad is in the past. Bambi and Falina spend all their time together and Bambi forgets about everything other than his darling. But Ronno, sensing he may be a rival, is furious. He challenges his rival to a duel and when Bambi refuses to fight he insults Falina. Protecting her, Bambi attacks Ronno himself and emerges victorious. Ronno has to take his leave. But Bambi is annoyed at having quarrelled. He retreats into the grove to be alone.

At the same time, people appear once again in the forest. They have come to cut down the largest tree — an oak which is the Squirrel’s home. In despair it asks for Bambi’s help.

Someone has to get rid of these uninvited intruders — the forest-dwellers need a new leader, someone brave and strong. The majestic Old Leader calls his son and passes on his crown. The new leader goes to the tree which has been cut down and sends the people fleeing and peace and tranquillity are restored to the forest.

Soon Falina and Bambi have two children of their own — Geno and Gurri.

Two one-act ballets for children — Bambi and In the Jungle. Have one thing in common — their story is based on the famous novel by Felix Salten Bambi, A Life in the Woods, a story of a little white-tailed deer, and its sequel, Bambi’s Children. The two ballets are performed on the same evening and meant as a family event. The performances are planned on Saturday and Sunday so that parents and their children can spend this weekend together in the company of their favorite fairy-tale characters.