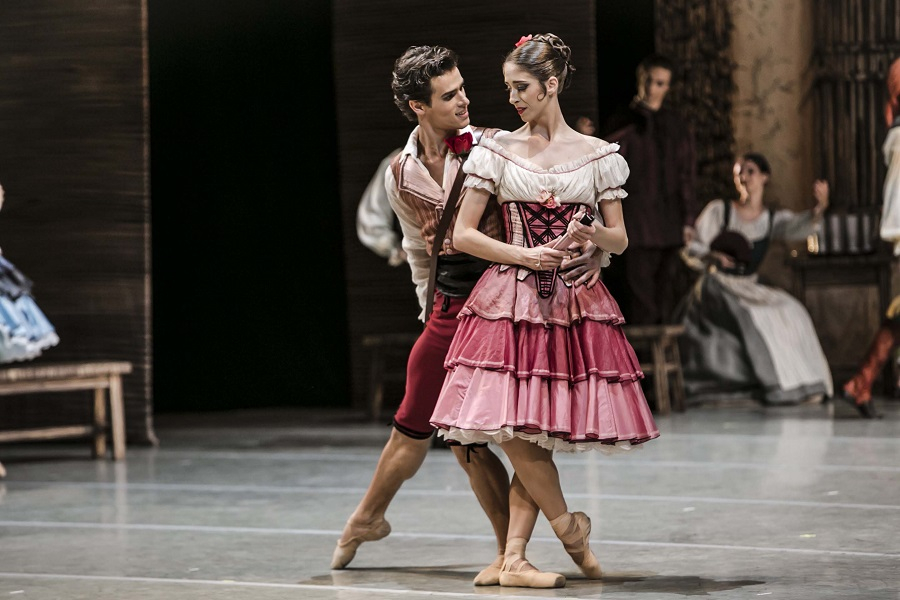 Prologue
Miguel de Cervantes’ study
Woefully lacking inspiration, the great Spanish writer struggles with every word. Hardship has plagued Cervantes over the latter years, and now most of his property is being moved out and stored away.
His two loyal servants are overseeing the local labourers, who are packing up and carrying off the books from the writer’s library. Albeit initially irritated by their presence. Cervantes starts to look closer at the people around him, and takes an interest in the romantic interludes playing out in front of him. His inspiration sparks again, and ideas come to him in abundance. The writer gleefully begins to plot out his next book. His new characters and their personalities soon become clear, and, writing with renewed passion, Cervantes vividly dreams up scenarios and stories where the dramatis personae have an uncanny resemblance to some familiar faces.

Act I
A Square in Barcelona
The carefree Kitri, daughter of the local innkeeper Lorenzo, is flirting with a young barber named Basilio. However, Basilio’s intentions are far more serious than the coy maiden could have assumed. Upon learning that Gamache, the eccentric and wealthy owner of the local bull-fighting arena, has marriage interests in Kitri, he immediately starts making his own wedding plans. Meanwhile, the bull-fighters return from a successful performance, headed by their main talent, the legendary Espada. They immediately gain the full attention of a crowd of adoring women. Mercedes, a young and beautiful lady, is especially interested in Espada. Don Quixote, who has declared himself a wandering knight in constant search of adventure, enters the square with his loyal squire Sancho Panza. For a while, they become the centre of attention of the playful and exuberant crowd. Recognising in Kitri and Basilio the romantic passionate love that he himself has been chasing, Don Quixote takes an immediate liking to the young sweethearts. It is not long before Kitri, Basilio, and their new friends sneak off, while Lorenzo and Gamache are left behind.

Act II
Scene 1. A Taverna
Barcelona’s youth celebrate, joined by Don Quixote and Sancho Panza. Some tension is brought on by the dancing gypsy ladies, but it calms and settles with Basilio and Espada finding mutual respect.
Suddenly, Gamache and Lorenzo catch up with the festive crowd. Aided by the gypsy women, Kitri once again manages to escape her strict parent's grip. Basilio, Don Quixote, and Sancho Panza quickly follow suit.

Scene 2. A Gypsy Camp
Enjoying the welcoming hospitality and the exotic and vibrant atmosphere of the gypsy camp, the young lovers and Don Quixote and Sancho Panza are absorbed and captivated by the very different way of life. But this gathering, too, abruptly comes to an end. Lorenzo manages to catch his daughter and rush her away. Don Quixote is both confused and disappointed by the others’ lack of desire to help the young lovers in need. All alone, the sad knight drifts away in visions and dreams.

Scene 3. Don Quixote’s Vision
Don Quixote traverses the realm of dreams, guided by Cupid and surrounded by ethereal maidens. The knight realises that actions are needed to change fate for the better. As he awakens, Sancho hands him an invitation to Kitri and Gamache’s wedding. Determined to help, Don Quixote sets off to do his duty, to speak up and save both the rightful love of Kitri and Basilio and his own honour.

Act III
A Square in Barcelona
Kitri and Gamache’s wedding ceremony is well under way when Basilio bursts in and interrupts it. Right in front of the wedding guests, the young man commits what looks like suicide. Weighed by little to no guilt, Lorenzo is forced to do the right thing by the hand of Don Quixote, and succumbs to the pressure. He blesses Kitri and her beloved, reasoning that Basilio is already dead anyway. Now blessed, Basilio jumps to his feet, alive and well. Lorenzo believes that he has performed a miracle. Utterly delighted by his new-found powers, the innkeeper permits his daughter to wed Basilio. Festivities resume, and a priest joins the young couple in marriage.

Epilogue
We are back in Cervantes’ study. Inspired by his friends and new impressions, the writer has finished his book. He has written what is to become one of the most momentous pieces of world literature. His readers will embark on a beautiful journey, full of adventure, of search and discovery, but most importantly of all, of love.

Leonid Yacobson Ballet’s Don Quixote, initially staged to celebrate the 200th birth anniversary of Marius Petipa, did not just become of the most eye-catching premières of the 2017/18 theatre season, but also joined the illustrious family of St Petersburg's most beloved productions.

Johan Kobborg, a world-famous ballet dancer and reputable choreographer with an astounding portfolio across the world's foremost venues, created his own interpretation of the legendary show. The audience have given well-deserved praise to this dynamic and vibrant performance, drenched in the blazing light of the Spanish sun, which shines upon a whirlwind of profound passion. A roller-coaster of a plot and a cast of spitfire characters are brought to life by expressive choreography and a gorgeous set design, courtesy of the world-class genius Jérôme Kaplan. The show also offers a refreshing approach to the classics, which it owes to its producer, Johan Kobborg, an ardent lover of Russian ballet, who is well-known as both a choreographer and a danseur to audiences of both the Bolshoi and Mariinsky Theatre. Thanks to the ballet, the great master's reputation as a paragon of male dance has now been augmented by worldwide fame as an attentive interpreter of the cultural heritage left by Marius Ivanovich Petipa, known as 'the Russian Frenchman'. The production has enjoyed top praise from theatre professionals. Don Quixote received seven Golden Mask nominations (Golden Mask is Russia’s foremost theatre award), and was also presented to the public in Moscow during the eponymous festival in 2019. Notably, Andrey Gudyma, who played Espada in the production, received the Golden Sofit Award, the most coveted theatre prize in St Petersburg, for this role (in the 2017/18 season).