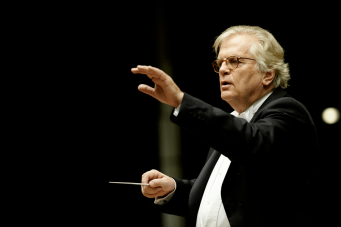 On August 7, 2022, during the VII International Mariinsky Far East Festival, Vladivostok, the world-renowned German pianist and conductor Justus Frantz will stand on his rostrum in front of the Mariinsky Orchestra to conduct the Ninth Symphony, a masterpiece by Ludwig van Beethoven, basing on Gustav Mahler’s score rarely used. The primary soprano, mezzo-soprano, tenor and bass parts will be performed by soloists of the Primorsky Stage of the Mariinsky Theatre.

In the world there are both opponents and advocates of Mahler’s instrumentation of the Ninth Symphony. Some consider Beethoven to be a man of genius whose scores may not be subject to interpretations, and some believe that brass winds had been incomplete in his lifetime, whereas during the life of Mahler, they provided more technics and opportunities to put expression into their playing or make their sounding surround, mild and lovely. However, Gustav Mahler has not rewritten notes in Beethoven’s score; he has just highlighted some points to make it more romantic and vigorous in order to adapt it to his time.

Justus Frantz is a regular guest conductor in many venues around the globe and works on a regular basis with renowned orchestras. In 1995 he founded the orchestra Philharmonia of the Nations. As its chief conductor, he works all over the world and discovers new names, constantly updating the cast of the orchestra. The pianist Evgeny Kissin, the violinists Vadim Repin, Maxim Vengerov and Midori Goto are among the musicians who have been first introduced to the audience by Justus Frantz, Anna Netrebko has debuted as Susanna in Le nozze di Figaro under his baton at the Mariinsky Theatre, and many other new talents have been found thanks to Justus Frantz.

Justus Frantz is a good friend of maestro Valery Gergiev and the Mariinsky Theatre. He has acquainted the European public with many Russian musicians. He got the name of a first-rate organizer, having founded the Schleswig-Holstein Music Festival, and remained its director for the next nine years. The Paul Hindemith Prize at the Schleswig-Holstein Music Festival has become a prestigious award for contemporary composers. Justus Frantz is noted for his educational activities. Every year he gives about hundred free performances for young people. In addition, he has created several successful TV programs including Achtung! Klassik (Attention! Classical music). Since 1989 Justus Frantz has acted as UNHCR Goodwill Ambassador, a celebrity advocate of the United Nations High Commissioner for Refugees. He has received numerous awards in Germany, Spain, Russia, Israel, Lithuania, and other countries.