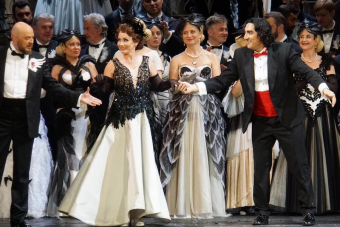 On July 7 and July 9, 2022, Giuseppe Verdi’s Un ballo in maschera was performed on the historic stage of the Bolshoi Theatre in Moscow. Soprano Elena Razgulyaeva, a soloist of the Opera Company of the Primorsky Stage of the Mariinsky Theatre, performed the primary female part of Amelia.

Elena Razgulyaeva is the Honored Artist of Russia and a prizewinner at international competitions. Having debuted as Mimi in La bohème in 2015, she continued to appear at the Bolshoi Theatre. In 2019 she joined the Opera Company of the Primorsky Stage of the Mariinsky Theatre in Vladivostok. Since then she has successfully performed the leading soprano parts in Puccini’s Madama Butterfly, Turandot and Tosca, in Verdi’s Aida, Don Carlo and Macbeth, in Tchaikovsky’s The Queen of Spades, Eugene Onegin and Mazepa, and in operas by other composers. Within the 2020/21 season Elena Razgulyaeva appeared as Nastasya Filippovna Barashkova in the world premiere of Idiot by the contemporary composer Alexander Smelkov, Saint Petersburg.