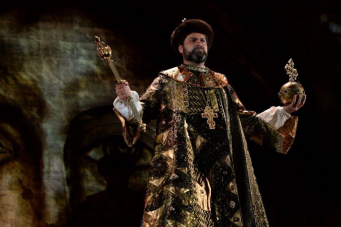 On August 4 and August 6, 2022, within the VII International Mariinsky Far East Festival, Vladivostok, the famous opera Boris Godunov by Modest Musorgsky will be presented at the Primorsky Stage of the Mariinsky Theatre.

The world-renowned bass Ildar Abdrazakov will perform one of his best parts – Boris Godunov – first at the Festival. On the stage of the Great Hall, the star bass will perform together with soloists of the Mariinsky Theatre such as Stanislav Trofimov, Sergei Semishkur, Yevgeny Akimov, Andrey Serov, and Mikhail Kolelishvili as well as soloists of the Primorsky Stage such as Vyacheslav Vasilyev and Laura Bustamante. The Mariinsky Orchestra will be under the baton of maestro Valery Gergiev.

In Vladivostok, the initial opera version written by Modest Musorgsky in 1869 will be performed. The composer had his own approach to the externalization of Pushkin’s original drama. The operatic dramaturgy is aimed at interpreting the tragic image of Tsar Boris Godunov, the suffering man who has taken up the heavy burden of state power. In the opera, Boris Godunov is a martyr who is accused of a crime and bothered by his conscience.