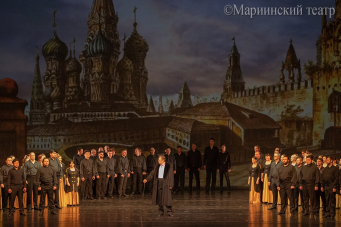 On May 29, 2022 the Primorsky Stage of the Mariinsky Theatre closed its 9th season with a concert performance of the grand national music drama Khovanshchina by Modest Mussorgsky.

The Far East Musical Express Festival was first held as an extensive tour of the Primorsky Stage over Far Eastern cities. The opera soloists, the chorus and the orchestra performed masterpieces of world classics in concert halls in ten localities within the Primorsky Region (including Ussuriysk, Nakhodka, Bolshoy Kamen, Artyom, Slavyanka, Fokino, Arsenyev, Partizansk, Mikhaylovka, and Spassk-Dalny) and at the Khabarovsk Musical Theatre.

The Primorsky Stage Ballet thrice appeared on the stage of the Mariinsky Theatre in Saint Petersburg within the 2021/2022 season. The ballet company performed A Thousand and One Nights, Le Corsaire, Giselle, The Sleeping Beauty, Phaedra, and Visions fugitives. In May 2022 the Primorsky Stage Ballet performed the choreographic piece Inspiration on the stage of the Moscow State Stanislavsky and Nemirovich-Danchenko Music Theatre.

Since the beginning of the 9th season, in the Great Hall, the Orchestra has given symphonic concerts that have brought together rarely performed masterpieces by both Russian (Nikolai Rimsky-Korsakov, Alexander Glazunov) and foreign composers (Wolfgang Amadeus Mozart, Felix Mendelssohn). In 2022 the Primorsky Stage started the symphonic cycle “Scriabin – 150” dedicated to the 150th anniversary of the birth of the most prominent Russian composer Alexander Scriabin. The concert cycle will encompass throughout the year all works written by the composer for symphony orchestra.

The Primorsky Stage’s repertoire for children and young people continued to expand. The Primorsky Stage of the Mariinsky Theatre considers such expanding to be one of its top-priority activities. Contemporary Russian composers’ operas for the very youngest were premiered, namely: Sergei Banevich’s Murych the Cat and Scenes from the Life of Nikolenka Irtenev and Leonid Klinichev’s The Little Prince. All those operas were staged by Alexei Stepanyuk. In March 2022 the Primorsky Stage Opera performed Murych the Cat in Ussuriysk and Partizansk.

In the autumn of 2021, the Pacific International Theatre Festival was first held at the Primorky Stage. Its program included performances of theatres from Japan, Switzerland, Argentina, Spain, South Korea, Georgia, Armenia, and Russia. In November 2021, the Saint Petersburg State Academic Yacobson Ballet Theatre presented its performance to the Far East audience in the Great Hall of the Primorsky Stage.