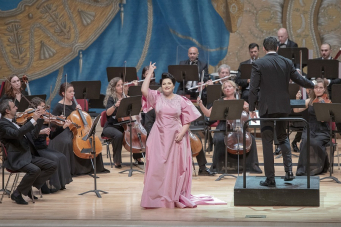 Hibla Gerzmava, a golden soprano of Russia, first appeared at the Primorsky Stage

On September 3, 2021 the solo concert that was given by Hibla Gerzmava at the Primorsky Stage of the Mariinsky Theatre was an absolute smash. Hibla Gerzmava is a world opera star who was awarded the title of People’s Artist of Russia and Abkhazia.

Hibla Gerzmava (soprano) is one of the famous Russian opera singers. She is a soloist at the Stanislavsky and Nemirovich-Danchenko Moscow Music Theatre and a guest soloist at the Mariinsky and Bolshoi Theatres. She appears on the best world stages: the Teatro alla Scala, the Royal Opera House (Covent Garden), the Metropolitan Opera, the Bayerische Staatsoper, the Teatro dell'Opera di Roma, and the Vienna State Opera. She tours much throughout the world and is a recipient of a lot of awards and prizes including Russia’s Golden Mask National Theatre Award, Golden Orpheus, Casta Diva, and Triumph Prize. In 2020 Hibla Gerzmava became a winner of the State Prize of Russia for her contribution to development of the Russian and international opera art.

Hibla Gerzmava includes her favorite arias and songs in her program: Norma’s cavatina Casta Diva from Bellini’s Norma, Adriana’s aria from Cilea’s Adriana Lecouvreur, Leonora’s arias from Verdi’s Il trovatore and La forza del destino, and poetic-sounding Ave Maria by Mascagni. She will keep on down the lyric line, singing songs by French, Italian and Russian composers. The Mariinsky Orchestra of the Primorsky Stage will take part in the concert under the baton of Valentin Uryupin, Principal Conductor of the Kolobov Novaya Opera Theatre of Moscow.

The diva noted that she was more than happy to accept the invitation to come to Vladivostok to sing under the auspices of the cultural program of the VI Eastern Economic Forum. Delighted with acoustics of the Primorsky Stage, Hibla Gerzmava noted that this theatre was a true pride of Vladivostok. The soloist expressed her gratitude to the audience and noted that the spectators missed live music, as she could see by their faces. Hibla Gerzmava emphasized that Vladivostok enchanted her and brought back her homeland Abkhazia. The singer imparted her prospects and said that she hoped to return to the beautiful Primorsky Stage of the Mariinsky Theatre to give joy to the audience in her new performance.