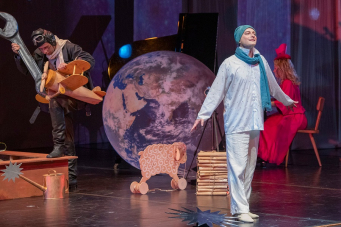 Children’s operas Murych the Cat, Scenes from the Life of Nikolenka Irtenev and The Little Prince were successfully premiered to be included in the Primorsky Stage repertoire

Sergei Banevich’s opera Murych the Cat is a story about a resourceful cat who celebrates his birthday among his friends. Both children and their parents were highly elated about it. Such soloists of the Primorsky Stage of the Mariinsky Theatre as Alexei Smirnov, Svetlana Rozhok, Elizaveta Senatorova, Irina Kolodyazhnaya, Ilya Astafurov, Yevgeny Mizin, Alexei Kostyuk, Elena Glushenko, Alina Mikhailik, Laura Bustamante, and Vsevolod Marilov performed in the premieres. The piano part was performed by Alexey Tikhomirov, a concertmaster of the Primorsky Stage.

“This opera teaches every child to be attentive to himself or herself, to the world around and to his or her people and friends and to respect and cherish his or her mentors, not differentiating between them. It contains stories of the happiness of friendship and love being the first, most important emotion that gives every child an opportunity to grow and bring the most valuable and touching feelings from his or her childhood. Jointly with the Opera Company and the Artistic Director, we carefully work at these performances so that to initiate children in the future into a really great opera. The whole team of the Primorsky Stage of the Mariinsky Theatre is fully responsible for this serious mission,” said Ilya Ustyantsev,  Director and Сhoreographer for the adaptation of performances on the Primorsky Stage.

Scenes from the Life of Nikolenka Irtenev opera by Sergei Banevich has been created after motifs of Leo Tolstoy’s autobiographic trilogy Childhood, Boyhood and Youth. The opera has turned out chamber and intimate; it tells us about the most precious, exciting and delicate stage of life. The roles were performed by such soloists of the Primorsky Stage as Roman Krukovich, Yevgeny Mizin, Ilya Astafurov, Dmitry Nelasov, Alexei Kostyuk, Anastasia Kikot, Maria Suzdaltseva, Alina Mikhailik, Vladimir Volkov, Dmitry Migulyov, Gennady Akhmedov, Vsevolod Marilov, Svetlana Rozhok, as well as by Alena Denisenko, a student of the Vocal Department of the Far Eastern State Institute of Arts. The piano part was performed by Alexey Tikhomirov, a concertmaster of the Primorsky Stage.

“Besides the most simple school function of acquaintance with the Leo Tolstoy’s novel, the opera succeeded in its prime task – this was seen by the audience’s reaction – to revive children’s mercy and empathy. And to quote the author, we can borrow the words of Nikolenka Irtenev’s mother who said that “sensitivity is the best ability of a heart,” Irina Soboleva stressed.

The after-theatre photo session took place to children’s and their parents’ joy; they could take pictures with the soloists who performed the primary roles in the operas, and get the autographs.