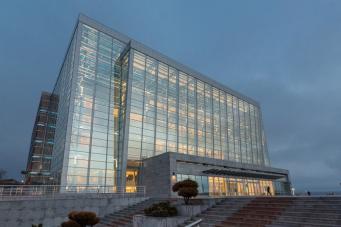 Due to an increase in the membership of the Opera Company, the Primorsky Stage announces opera voice auditions to fill vacancies of soprano, mezzo-soprano, tenor, baritone and bass solo singers

AUDITION TERMS
Please, send to glushenko@mariinsky.ru:
– your CV that specifies your education, scenic experience (if any) and repertoire;
– your photo; and
– links to audio/video records of your concerts or performances.

You should submit your application on or before December 12, 2021. No application submitted after the above date will be accepted. Please, contact Elena Aleksandrovna Glushenko, Director of the Opera Company, for details by +7 914 730 7941 with Vladivostok time taken into account.

According to results of consideration of CVs and records some applicants will be invited to auditions in Saint Petersburg or Vladivostok. All audition expenses (including travel, accommodation, etc.) should be paid by applicants.

Any applicant should have a negative COVID-19 test done by the PCR method at least 72 hours before the audition or a QR code confirming undergoing a full vaccination course for the coronavirus infection.

IMPORTANT NOTE: The Primorsky Stage does not comment a decision taken upon consideration of any application.

AUDITION PROCEDURE
The auditions are expected to be held at the end of December 2021 or at the beginning of January 2022 in Saint Petersburg and Vladivostok. The exact place and time will be announced additionally.

Any applicant should perform one compulsory aria and may choose another one from the following list:

Coloratura soprano:
Aria of the Queen of Night from Die Zauberflöte by Wolfgang Amadeus Mozart (compulsory)
Aria of Marfa from The Tsar’s Bride (Act IV) by Nikolai Rimsky-Korsakov
Cavatina of Lyudmila from Ruslan and Lyudmila by Mikhail Glinka

Mezzo-soprano:
Aria of Ratmir from Ruslan and Lyudmila by Mikhail Glinka (compulsory)
Arioso of Lyubasha from The Tsar’s Bride (Act I) by Nikolai Rimsky-Korsakov
Aria of Eboli from Don Carlo by Giuseppe Verdi

Tenor:
Thunder scene from The Queen of Spades by Pyotr Tchaikovsky (compulsory)
Aria of Radamès from Aida by Giuseppe Verdi
Aria of Calaf from Turandot by Giacomo Puccini

Baritone:
Aria of Rigoletto from Rigoletto by Giuseppe Verdi (compulsory)
Aria of Gryaznoi from The Tsar’s Bride by Nikolai Rimsky-Korsakov
Arioso of Mazepa from Mazepa by Pyotr Tchaikovsky

Bass:
Aria of Ruslan from Ruslan and Lyudmila by Mikhail Glinka (compulsory)
Aria of Filippo from Don Carlo by Giuseppe Verdi
Dungeon scene (“Three treasures”) from Mazepa by Pyotr Tchaikovsky

The Theatre will render accompanist’s services free of charge.