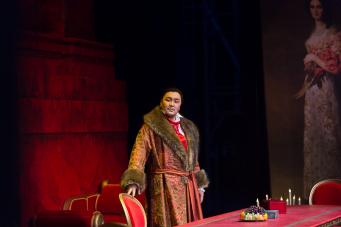 In February the primary arias in some operatic performances are to be sung by guest actors from Russia, Mongolia and South Korea.

On February 9, 2020 Avgust Amonov, a soloist of the Mariinsky Theatre and a prize-winner at the XIX International Glinka Vocalists’ Competition, will make his debut as Herman in Pyotr Tchaikovsky’s The Queen of Spades. The Countess’s aria will be sung by distinguished mezzo-soprano Larisa Diadkova awarded the title of People’s Artist of Russia. Liliya Kadnikova as Liza, Marat Mukhametzyanov as Count Tomsky, Tatiana Makarchuk as Polina, and Alexei Bublik as Prince Yeletsky will be their companions on the stage. The baton will be held by Pavel Smelkov, a principal conductor of the Mariinsky Orchestra of the Primorsky Stage.

On February 12, 2020 La traviata by Giuseppe Verdi will be performed with Olga Zharikova as Violetta Valéry and Roman Krukovich as Alfredo Germont. The part of Giorgio Germont will be sung by baritone Gihoon Kim from South Korea. In 2019 the singer got the 2nd prize and the audience prize at Operalia World Opera Competition, and the 2nd prize at the XVI International Tchaikovsky Competition. The orchestra will play under the baton of Pavel Smelkov.

On February 20 , 2020 Ariunbaatar Ganbaatar (Mongolia), a Grand Prix winner at the XV International Tchaikovsky Competition and a guest soloist with the Mariinsky Theatre, will perform the part of Baron Scarpia in Tosca by Giacomo Puccini. Elena Razgulyaeva, an Honoured Artist of Russia, will make her debut as Floria Tosca. Mergen Sandanov, an Honoured Artist of the Republic of Buryatia, will act the part of Mario Cavaradossi. The Mariinsky Orchestra of the Primorsky Stage in Tosca will be first conducted by the Japanese maestro Shizuo Z Kuwahara.

The opera repertoire in February also includes the exotic and picturesque masterpiece Aida by Giuseppe Verdi on February 7 , 2020, the carol opera Christmas Eve by Nikolai Rimsky-Korsakov based on Nikolai Gogol’s immortal plot on February 27, 2020 and Carmen as the most Spanish opera written by French composer Georges Bizet – on February 29 , 2020.