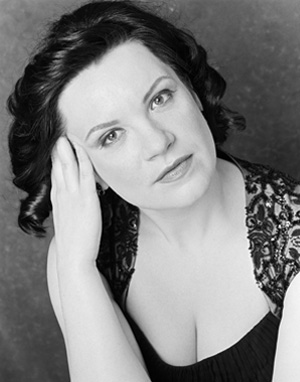 Ekaterina Semenchuk’s operatic curriculum vitae leaves no room for doubt – the mezzo-soprano deservedly holds the position of one of the Mariinsky Opera Company’s younger leaders... It is clear to see that Ms Semenchuk today has no less potential than Elena Obraztsova once possessed.
Kommersant

Ekaterina, in addition to her vocal talents, also has a vivid and expressive dramatic gift, and so it is not just roles in operas but also any romance that she performs that form an entire story about love and life which cannot fail to affect the audience.
Argumenty i Fakty

Ekaterina Semenchuk was born in Minsk. In 2001 she graduated from the St Petersburg State Rimsky-Korsakov Conservatory (class of Yevgenia Gorokhovskaya). One year earlier, as a student at the Academy of Young Opera Singers, she made her debut at the Mariinsky Theatre, took part in performances on tour with the company at La Scala (Sonia in War and Peace) and in Salzburg (Polina in The Queen of Spades) and was a finalist at the Operalia competition in Los Angeles. In 2001 she was a finalist in the BBC Cardiff Singer of the World competition.

In the course of the 2019–2020 season, Ekaterina Semenchuk made her debut at the Bolshoi Theatre of Russia in a new production of the opera Sadko staged by Dmitri Tcherniakov.

The singer has dedicated a great deal of attention to chamber vocal music since the very outset of her creative career. For the harmonia mundi label in 2006 she recorded romances by Tchaikovsky, Rachmaninoff, Taneyev, Grechaninov and Glière (the piano part being performed by Larisa Gergieva). Ekaterina Semenchuk’s programmes for chamber music evenings are always notable for their refinement and meaningfulness as well as for her own performance thanks to her outstanding skill. Over the years, the singer has been partnered on the stage by the pianists Dmitry Yefimov, Helmut Deutsch and Semyon Skigin.

In 2005 Ekaterina Semenchuk was awarded the title of Honoured Artist of the Republic of North Ossetia – Alania.