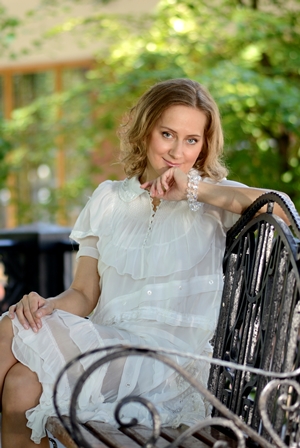 Elena Popovskaya graduated from the Moscow State Tchaikovsky Conservatory (class of K.G. Kadinskaya, Honored Artist of the RSFSR). Since 1998, she has been a soloist of the Kolobov Novaya Opera Theatre of Moscow; since 2007, she has been an invited soloist of the Bolshoi Theater, where she made her debut in Lisa’s party in a new production of The Queen of Spades by P.I. Tchaikovsky under direction of Mikhail Pletnev. Then she performed the parts of Turandot in the opera of the same name, Renata in Fiery Angel, and the part of Princess Yaroslavna in Yuri Lyubimov’s new production, Prince Igor. With the Yaroslavna Party, the singer also appeared on the stage of the Novaya Opera Theatre, the Novosibirsk Opera and Ballet Theater, Tel Aviv Opera and the English National Opera in London.

Elena Popovskaya performed the part of Renata in Prokofyev’s Fiery Angel in La Monnaie Theater (Brussels, 2006, conducted by Kazushi Ono and directed by Richard Johnes), the part of Lisa in Tchaikovsky’s The Queen of Spades in the Latvian National opera (Riga, 2007). In 2008, she became the first Russian singer invited to perform the part of Turandot at Torre del Lago Puccini Festival (Italy).

In 2010, in Italy, the singer performed the part of Elektra in the opera of the same name by R. Strauss (conductor Gustav Kun), Manon (Manon Lescaut by G. Puccini) at the Pavarotti Theater in Modena. In the summer of the same year Elena Popovskaya acted as Turandot on the stage of the Arena di Verona in a new production of the same Puccini’s opera by Franco Zeffirelli.

In the season 2010/11, Elena Popovskaya made her debut at the Mariinsky Theater (St Petersburg), performing the roles of Lisa (The Queen of Spades by P.I. Tchaikovsky), Turandot (Turandot by G. Puccini), Amelia (Masquerade by J. Verdi). In 2012, she made her debut at the Rome Opera as Cio-Cio-san (Madame Butterfly by J. Puccini, conductor Pinchas Steinberg). In 2013, on the stage of the Bologna Opera House (Italy), she sang the part of Santi (Flying Dutchman by R. Wagner) and the title part in G. Puccini’s Turandot on the stage of the Roman Opera. Also, she made a debut in the title role in Wagner’s Tristan and Isolde staged by Nikola Raab (Conductor Jan Latham-Koenig).

In 2014, she made her debut in the Gioconda part in the opera of the same name by Ponchielli on the stage of the Marseilles opera (France). In November 2015, Elena Popovskaya made her debut at the Colon Theater in Renata’s party in The Fiery Angel by S.S. Prokofiev. In 2016, the singer performed the part of Gioconda in the most prestigious opera house of Beijing, NCPA (conductor Daniel Oren, director Pier Luigi Pizzi).

In 2017, she made her debut at the Liceu Theater (Barcelona) in the premiere performances of The Flying Dutchman with the part of Senta, and also made her debut in the title role of Dmitry Shostakovich’s Katerina Izmailova on the stage of the Bolshoi Theater. Elena Popovskaya appears with such orchestras as the Moscow Philharmonic Orchestra, Chamber Orchestra Musica Viva, the State Academic Symphony Orchestra of Russia, and the Russkaya Filarmoniya (“Russian Philharmonic”) Orchestra.