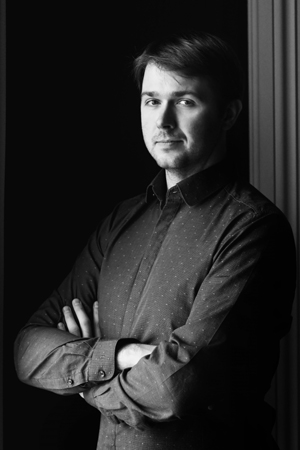 The second Cellini, Ivan Gyngazov, had a tenor voice that is liberated and powerful. Music lovers came especially to see this extraordinary singer, desiring to hear this rising star of Russian opera.

Helikon Opera’s tenor Ivan Gyngazov can cope with the incredibly complex role of the titular hero [of the opera Benvenuto Cellini], which combines dramatic intensity and extremely high upper notes. This vocalist’s skills increase with each passing year, and he can control better and better his powerful and rich though not too obedient voice.

Born in Novosibirsk, Ivan Gyngazov graduated from the M.I. Glinka Novosibirsk State Conservatory in 2013, where he studied under the guidance of Marina Akhmedova. From 2013 to 2017 he worked as a soloist for the Novosibirsk Opera, where he performed such leading operatic roles as Lensky (Eugene Onegin), Vladimir Igorevich (Prince Igor) and Pinkerton (Madama Butterfly). In the same period Gyngazov also sang Lensky at the Ural Opera.

In 2017 he made his debut at the Helikon Opera in Moscow as Manrico (Il trovatore), after which he became a soloist with the company. His repertoire includes such roles as Calaf (Turandot), Riccardo (Un ballo in maschera), Andrei (Mazepa), Herman (The Queen of Spades), Sergei (Lady Macbeth of Mtsensk), Young Gypsy (Aleko), Don José (Carmen), Lensky (Eugene Onegin), Paris (La Belle Hélène), Vaudémont (Iolanta), Mario Cavaradossi (Tosca), Alpha (Gil Shohat’s opera Alpha & Omega based on Edvard Munch’s lithographic tale) and the tenor role in Verdi’s Requiem.

In 2019 Ivan Gyngazov made his first appearance at the Theater an der Wien as Vaudémont (Iolanta) and Huldbrand (Tchaikovsky’s Undine). In the same year he debuted at the Mariinsky Theatre as Riccardo (Un ballo in maschera), at the Teatro Petruzzelli in Bari as Lensky (Eugene Onegin) and at the Semperoper Dresden as Ismaele (Nabucco). He has sung at the Alexandrinsky Theatre (St Petersburg), the Musikverein in Vienna, the State Academic Bolshoi Theatre of Uzbekistan named after Alisher Navoi (Tashkent; Alfredo Germont in La traviata), the Moscow Philharmonic Society and the Moscow Concert Hall Zaryadye among other venues.

Recent engagements include debut at the Bolshoi Theatre of Russia in Moscow, where he appeared as Sadko in a new production (2020) by Dmitri Tcherniakov, and interpretation of Andrei Morozov (The Oprichnik) at the Mikhailovsky Theatre and of Manrico at the Opéra de Rouen Normandie (2021).