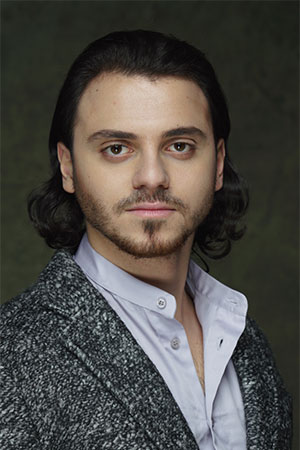 Gamid Abdulov was born in 1995 in Ivanovo. In 2013, he graduated from the Bulbul Specialised Middle Music School in Baku, where he studied composition, music and academic singing theory. That same year, he entered the St Petersburg State Rimsky-Korsakov Conservatoire (where he studied composition under Grigory Korchmar). He went on to study at the Elena Obraztsova International Academy of Music under Yevgeny Akimov.

In 2018, he became a fellow of the Atkins Young Artist Program at the Mariinsky Theatre.

At the Mariinsky Theatre he made his debut in La Bohème (as Schaunard) in October 2019. At the theatre’s Concert Hall he has performed Gustav Mahler’s song cycle Lieder eines fahrenden Gesellen. Has participated in a Mariinsky Theatre festival in Vladikavkaz, where he performed the role of Pelléas in the opera Pelléas et Mélisande and the role of Schaunard in La Bohème.

Abdulov has performed at the Small and Great Halls of the St Petersburg Philharmonic, the Concert Hall of the Mariinsky Theatre and the Tallinn Philharmonic. He has also taken part in the Elena International Festival in St Petersburg, the Ildar Abdrazakov Festival in Ufa and a series of Russian concerts in Hong Kong.