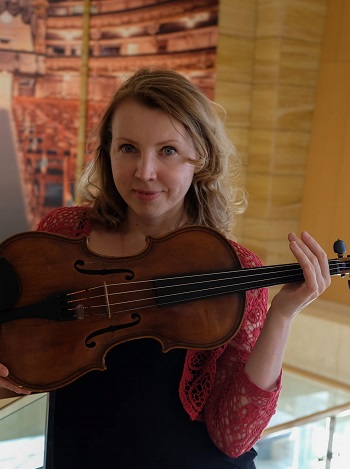 In 2006 Valentina Severina graduated from the N.A. Rimsky-Korsakov Saint Petersburg State Conservatory where she studied under Andrey Dogadin, Professor, Honored Artist of Russia.

From 1999 to 2013 she has performed with the Orchestra of the Zazerkalie (“Looking Glass”) Children’s Musical Theatre under the guidance of Pavel Bubelnikov where in 2003 she became an assistant to the Principal Viola.

From 2005 to 2013 she has performed with the St. Petersburg State Hermitage Orchestra of St. Petersburg (Camerata) led by Saulius Sondeckis, and further by Fabio Mastrangelo.

During her work with this Orchestra she has appeared with conductors such as Valery Gergiev, Tugan Sokhiev, Constantine Orbelian, Andres Mustonen, Marco Guidarini, Felix Korobov, and Krzysztof Penderecki.