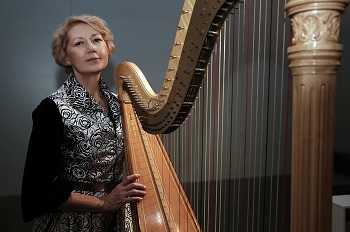 Tereza Charyeva graduated from the Moscow State Tchaikovsky Conservatory in 1981 (class of the recipient of the State Prize of the USSR and People’s Artist of the USSR, prof. Vera Georgievna Dulova,). She immediately became a member of a harp quartet with Rosconcert Concert Tour Association.

She took part in concerts and performances under the batons of such conductors as Gennady Provatorov, Gennady Rozhdestvensky, Fuat Mansurov, Yuri Simonov, Veronika Dudarova, and Sergei Skripka.

From 1986 to 2014 Tereza Charyeva was a Principal Harp at the National Academic Grand Opera and Ballet Theatre of the Republic of Belarus. Since 1991 she has toured many times over Italy, Germany, Spain, Holland, Austria, Switzerland, France, Poland, and Thailand.

In 2003 she was awarded a certificate of appreciation from the Belarus Ministry of Culture.

In 2013 she was an honorary guest at the International Competition of Harpists “Harp – 21st Century” chaired by Emilia Moskvitina, at which Tereza Charyeva’s tutee A. Uvarova received the 2nd prize.