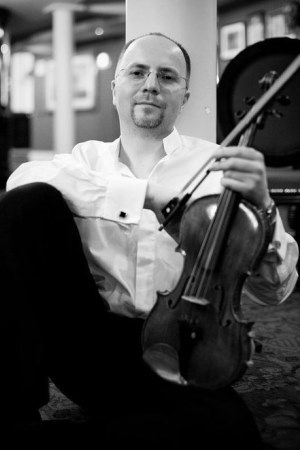 Born in Russia, Sergey Levitin studied at the St Petersburg State Conservatory and the Conservatory for Music and Performing Arts in Vienna.

Sergei Levitin is a laureate and a holder of professional awards at such prestigious competitions as the International Violin Competition “Rudolfo Liizer Prize”, the Belini Chamber Music Cmpetion in Caltanissetta, and the Paganini Competition in Genoa where he was the first Russian violinist winning the prize for the best performance of Paganini’s capriccios.

In 1996–2003 he worked as a concertmaster for the Mariinsky Theatre Symphony Orchestra conducted by Valery Gergiev. Together with Valery Gergiev and Gianandrea Noseda, a famous Italian conductor, he played with the orchestra as a soloist performing at the Edinburgh Festival, the White Nights Festival (St Petersburg, Russia). He took part in the orchestra’s concert tour around the USA, Switzerland, Finland and Italy. Subsequently together with Maestro Gergiev and the Mariinsky Orchestra he made recordings with Philips Classics and Decca including Shostakovich’s symphonies and Rimsky-Korsakov’s Sheherazade. Today Sergey Levitin is a concertmaster of the Royal Opera House Covent Garden. As a soloist and a member of chamber groups he performs at various venues such as the Wigmore Hall in London, UNESCO Headquarters and Théâtre du Châtelet in Paris; at the Convent Garden he participates in different projects together with the company of the Royal Ballet. Sergey Levitin also toured in the UK, Italy, the Netherlands, Germany, and Spain both with the orchestra and the Covent Garden Chamber Orchestra.