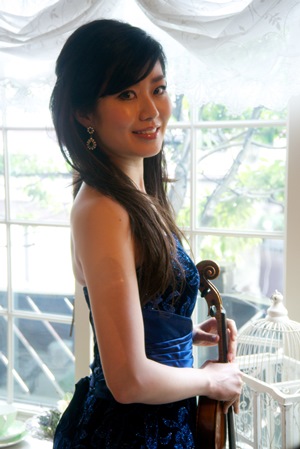 Born in Tokyo, Mayuko Katsumura studied with Prof. Yasuro Sumi and graduated from the Music High School of the Tokyo National University of Fine Arts and Music. In 1997, Mayuko moved to London to continue her studies with Prof. Yfrah Neaman at the Guildhall School of Music and Drama.

In season 2004/05, Mayuko performed extensively with major Romanian orchestras including the Timisoara Banatul Philharmonic and the Craiova Oltenia Philharmonic.

In 2006 Mayuko made her London orchestral debut at St. John’s Smith Square with the London Soloists Chamber Orchestra, performing Beethoven’s Violin Concerto, which led to her invitation to perform with the Milton Keynes City Orchestra at the High Sheriff’s Concert.

In 2007, she gave a recital at the prestigious Wigmore Hall (London) and later on that year performed Prokofiev’s 2nd Violin Concerto accompanied by the English Chamber Orchestra at the Cadogan Hall (London).

In 2007/08 season, she performed with the Orchestra Sinfonica del Friuli Venezia-Giulia in Italy followed by a recital at the Wigmore Hall in April 2008.

In 2009/10 season, she toured Romania with Romanian national orchestras. Her tour included yet another orchestral debut with the Zagreb Philharmonic (Croatia) and a series of recitals in Italy and England, where she launched her first CD recording with Maestro Bruno Canino released by the Biddulph Recordings. In 2011/12 season, she gave recitals in Poland, US, England and in Japan.