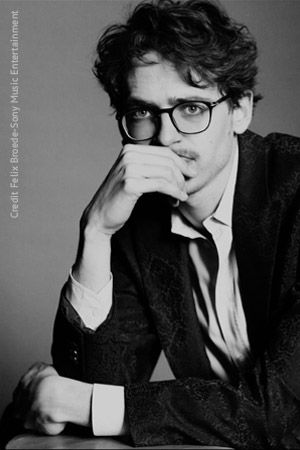 Though placed only fourth at the 15th International Tchaikovsky Competition in July 2015 Lucas Debargue was the only musician across all disciplines who was awarded the coveted Moscow Music Critic’s Prize. Straight after this incredible breakthrough Lucas Debargue is invited to play solo and with leading orchestras in the most prestigious concert halls in Russia, France, Italy, the UK, Germany, the USA, Canada, Mexico, Japan, China, South Korea and with such famous conductors as Valery Gergiev, Mikhail Pletnev, Vladimir Jurowsky, Andrey Boreyko, Tougan Sokhiev, Gidon Kremer, Vladimir Spivakov, Vladimir Fedoseev. Lucas Debargue has already released three CDs, the first with works of Scarlatti, Chopin, Liszt and Ravel (April 2016), the second with works of Bach, Beethoven and Medtner (September 2016) and the third with works of Schubert and Szymanowski (October 2017), all with the Sony Classical label. He also participated in the recording of Messiaen’s Quatuor pour la Fin du Temps for Sony (released in November 2017). In 2017 he was awarded the prestigious German music prize ECHO Klassik.

Born in 1990, Lucas Debargue was 11 years old when he took his first piano lessons at the Compiègne Conservatory, in the class of Christine Muenier. He got quickly fascinated by the virtuoso repertoire, yet it wasn’t until 10 years later, after he had graduated from Paris Diderot University with a Bachelor’s Art Degree, that he decided to return to studying piano at the professional level. After a year of studies at the Beauvais Conservatory in the class of Philippe Tamborini, he was put in touch in 2011 with his current mentor, the celebrated Russian professor Rena Shereshevskaya. This encounter became decisive for Lucas Debargue: she quickly recognized in him a piano interpreter with a great future and accepted him in her class at the École Normale de Musique de Paris Alfred Cortot to prepare him for the major international competitions.

In 2014 he won the 1st prize at the 9th Gaillard International Piano Competition (France) before becoming one of the prize winners at the 15th Tchaikovsky Competition when the world instantly discovered a startling and original new talent. In April 2016 he obtained there a Diplôme Supérieur de Concertiste with a Special Cortot Prize. He currently continues to work with Rena Shereshevskaya at the postgraduate level of the same school.

Debargue’s engagements for the 2018–2019 season include concerts at the Wiener Konzerthaus, the Kulturpalast Dresden, the Théâtre des Champs Elysées in Paris, the Moscow State Philharmonic Society, the Great Hall of the Moscow State Conservatory, Wigmore Hall in London, the Santori Hall in Tokyo, as well as at the Festival International de Piano de la Roque d'Anthéron and the Lavaux Classic Festival in Cully (Switzerland).

Though the core piano repertoire is central to his career, Lucas Debargue is also keen to present works by lesser-known composers such as Nikolai Medtner, Samuel Maykapar or Nikolai Roslavets. He also composes and performs his own music: a concertino for piano, percussions and string orchestra with Kremerata Baltica was premiered June 2017 in Cēsis, Latvia and a piano trio was performed in September 2017 at the Paris Fondation Louis Vuitton. Lucas Debargue has been the subject of a documentary Lucas Debargue: To Music, directed by Martin Mirabel and produced by Bel Air Media. The movie follows the pianist in the aftermath of his success at the Tchaikovsky Competition and was released in the autumn 2017.