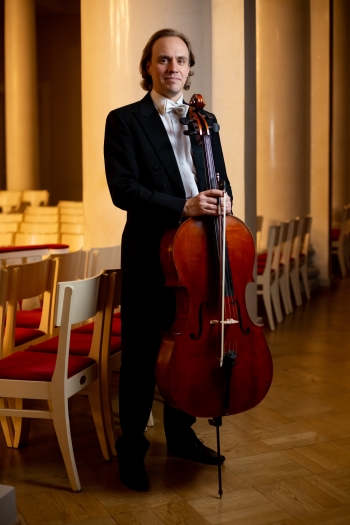 At six he began to take piano lessons, at seven he went to a music school to be taught the cello. After finishing the school he studied at the Rimsky-Korsakov Musical College.

Dmitry Khrychov went on to study the cello under Assoc. Prof. Massarsky at the Saint Petersburg Conservatory. A student of the Conservatory, he won the second award at the Gartow Stiftung Cello Competition and, together with other musicians, created The Neva String Quartet.

He took part in foreign masterclasses in Germany, Austria and Great Britain and was a winner of international competitions such as the Shostakovich Competition of String Quarters in Saint Petersburg in 1996 and in Moscow in 1999 and the International Competition Frantz Schubert and 20th Century Music in Graz, Austria in 1997.

At the same time he was extensively engaged in concert activities and cooperated with many famous musicians such as Petrer Laul, Aleksey Massarsky, Sergey Stadler, Pavel Popov, Lev Klychkov, and others.

In 2006 Dmitry Khrychov became a member of Philharmonia of Nations under the baton of Justus Frantz, where he was a first cello and a cello concertmaster.

In 2009 he became an assistant concertmaster and two years later did a cello concertmaster at the celebrated Russian symphonic orchestra: the Saint Petersburg Philharmonic under Yuri Temirkanov’s baton. Dmitry Khrychov performs as a first cello with orchestras under the baton of Yuri Temirkanov, Nikolay Alekseev, Eduard Serov, Alexander Titov, Justus Frantz, Krzysztof Penderecki, and Leo Krämer.

Dmitry Khrychov recorded some CD albums including cello concerts by Weinberg and Glière.