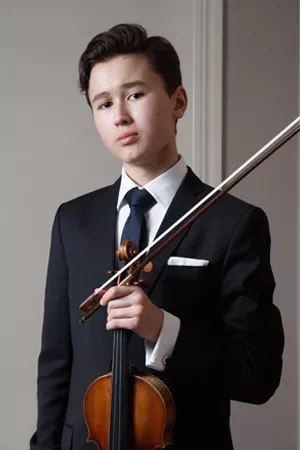 Daniel Lozakovitj was born in 2001 in Stockholm. After seeing a violin for the first time at the age of 6.5 years old, he decided right away to become a violinist.

In just 2 years of studying he made his debut with Vladimir Spivakov's Moscow Virtuosi Chamber orchestra. In 2012, Lozakovitj enrolled into the Karlsruhe's University of Music (Josef Rissin's class). Since 2015 he has been coached by Eduard Wulfson. Lozakovitj is currently undergoing academic training at Collège du Léman in Geneva.

His young age notwithstanding, musician in major international festivals, such as the Verbier Festival, Мartha Argerich Project, the Sommets Musicaux de Gstaad, the Stars of the White Nights festival, Mstislav Rostropovich Festival in Baku, Garinthian Summer Music Festival in Austria, Moscow Easter Festival, MPHIL 360°, the Baltic Sea Festival in Stockholm, the Rotterdam Gergiev Festival, and the festivals in Colmar and Aix-en-Provence.