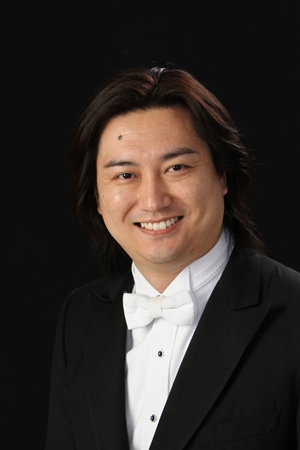 The First Prize winner of the prestigious Georg Solti International Conductors’ Competition in Frankfurt, Germany, Shizuo Z Kuwahara is a frequent guest conductor of the Mariinsky Theatre and Osaka Symphony. His conducting career ascended rapidly after winning the Solti Competition, leading to conducting invitations from Rundfunk-Sinfonieorchesters Saarbrücken, Polish Chamber Orchestra, Nice Philharmonic, and Frankfurt Museumsorchester. With the invitation from Valery Gergiev, Kuwahara made a sensational debut with the Primorsky Stage of the Mariinsky Theatre with the production of Verdi’s La traviata, which resulted in a long term relationship with the company for the future seasons. In the season 2019/20 Shizuo became a principal guest conductor of the Primorsky Stage of the Mariinsky Theatre.

Mr Kuwahara was with the Philadelphia Orchestra as a League of American Orchestras conducting fellow, covering and leading numerous concerts as an apprentice to Christoph Eschenbach. Other past positions include assistant conductor to Seiji Ozawa at the Saito Kinen Festival in summer of 2008, conducting the Ozawa Jyuku Orchestra. He spent his summer of 2006 in Sapporo, Japan serving as an assistant conductor to Valery Gergiev at the Pacific Music Festival. At the beginning of his career, Mr. Kuwahara served as Professor of Music and Director of Orchestral Activities at the College of William & Mary and American University, as well as an associate conductor of the Virginia Symphony. He has recently concluded 7 years tenure as the music director of Symphony Orchestra Augusta.

Born in Tokyo, Mr Kuwahara received Master’s Degree studied conducting at Yale University, where he was awarded the Charles Ives Full Scholarship and awarded the Eleazar de Carvalho Prize. At the Eastman School of Music, he received Bachelor’s Degree and Arts Leadership Program Certificate, with honorable recognition of Performer's Certificate and the George Eastman Scholarship. In addition to studying with David Effron and Lawrence Leighton Smith at these conservatories, Mr. Kuwahara has also studied with Leonard Slatkin, David Zinman, Timothy Muffitt and Michael Jinbo at various conducting institutions, including Aspen, the National Conducting Institute, the Pierre Monteux School, and the Chautauqua Music Institute.