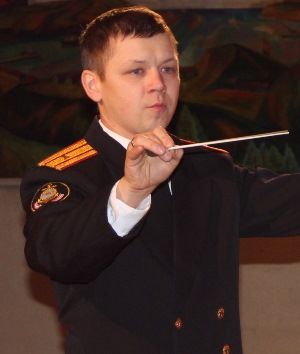 Andrei Popov was born on the 26th of September 1978 in the Tula Region of Russia. In 1997 he graduated from the Novomoskovskoy College of Music where he studied the trumpet and entered the military conducting department of the Moscow Conservatory. In 2002 he was sent to the Military Orchestra of the motorized infantry division (Bikin, Khabarovsk Region). Since then he has worked exclusively in the Far East. In 2012 he was given the post of military conductor of the Orchestra of the Pacific Fleet, and holds the position as the chief conductor since 2013.