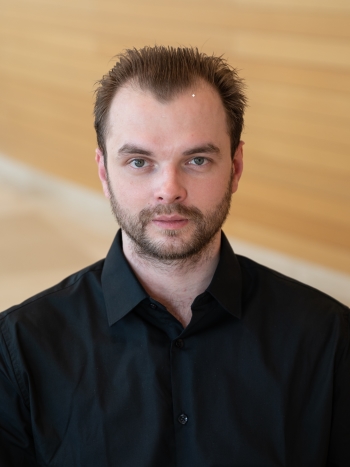 In 2009, Ilya Ustyantsev graduated with honors from Omsk F.M.Dostoevsky State University. In 2015 he graduated from the N.A.Rimsky-Korsakov St. Petersburg State Conservatory (class of George Kovtun).

In 2007 he won the Grand Prix at the Golden Phoenix international competition in St. Petersburg. He also won the F.V.Lopukhov Open Competition of Choreographers (St. Petersburg, 2010), and became laureate of the Youth Award of the St. Petersburg Government in the field of artistic creativity (2012). He is also laureate of the Riga Spring Youth Choreographic Competition (1st prize, 2012), winner of the All-Russian Open Dance Festival “The Alternative” (2011). In 2013, he won the 1st prize of the Fiestalonia Milenio International Competitive Festival in Lloret de Mar (Spain).

As choreographer of the Mariinsky Theatre, he worked on the following performances: Lefty (2013), Eugene Onegin (2013), The Queen of Spades (2015), Christmas Fairy Tale (2015) staged by Alexey Stepanyuk; The Love Potion (2013) staged by Alexander Petrov; Adriana Lecouvreur (2017) directed by Isabelle Partiot-Pieri; The Diary of Anne Frank (2017) directed by Mstislav Pentkovsky.

As assistant director and choreographer, he participated in the preparation of many performances of the Mariinsky Theatre. In 2016, Carmen (director’s remake of the production of 2005), The Story of Kai and Gerda, Scenes from the Life of Nikolai Irtenev, The White Nights, The Idiot, The Little Prince staged by Alexei Stepanyuk; in 2017, Murych the Cat staged by Alexei Stepanyuk, and Brundibar staged by Mstislav Pentkovsky. He also participated in the production of Eugene Onegin at the Primorsky Opera and Ballet Theatre (2014); Brundibar (2017) and Aida (2018) at the Vladikavkaz branch of the Mariinsky Theatre (the Republic of North Ossetia-Alania).

In 2018, he staged The Tango Without You ballet to the music of Astor Piazzolla at the Vladikavkaz branch of the Mariinsky Theatre.

He is the choreography director of The Griffin’s Wings rock show (2018) of the Concord Orchestra at the St. Petersburg Ice Palace.