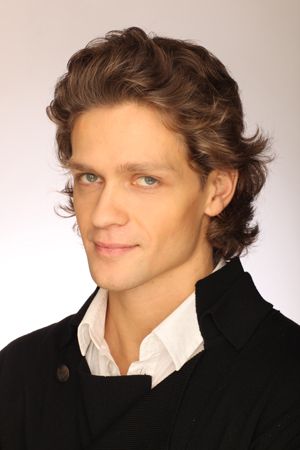 Yuri Smekalov, in addition to his pure dance qualities, offers magnificent partnering and a precise feel for the choreographer’s plastique; he performed Vronsky in a multifaceted way. He is tender in his duet with Kitty, stunned at his meeting with Anna, he wins her over, he understands Karenin’s anxiety (arguably the male duet cedes nothing in terms of drama to Anna’s duets with Karenin).

There is Evil in every fairytale which the protagonists must battle. In Ratmansky’s ballet this is the Chamber Servant performed by Yuri Smekalov. The performer brilliantly created the image of the perfidious courtier using ‘serpentine’ body language, vivid facial expressions, flattering gestures and fingers that spoke. In the character’s very steps there is the latent cowardly caution of a dark court politician.

As the handsome Harmodius, Yuri Smekalov grips the audience with the expressiveness of his dance and acting. The image he created was multifaceted – from Spartacus’ faithful comrade to the traitor who seduces the cunning Aegina. The actor brings a number of psychological hues to the character – youthful fervour, naive trust, wrath and the stinging amour propre of a proud man. With the most tremendous power, the dancer enacts the death of Harmodius onstage – the end of hope, a sense of his own inevitable death – all of this flows in the dance monologue of a broken being who has come to pay the price for treachery.

In 1998, he graduated from the Vaganova Academy of Russian Ballet (class of Konstantin Shatilov).

From 1998-2009, he was a soloist with the Boris Eifman St Petersburg State Academic Ballet Theatre, where he danced the lead roles in ballets including Don Quixote, or Fantasies of a Madman, Tchaikovsky, The Karamazovs, Red Giselle, Russian Hamlet, Don Juan and Molière, WHO is WHO, Anna Karenina, Requiem, My Jerusalem and The Seagull.

Yuri Smekalov was invited to join the Mariinsky Theatre in February 2009.

Has toured with the Mariinsky Ballet to Europe, Asia and America.

On 23 February 2014 he performed the role of Diaghilev in the closing ceremony of the XXII Winter Olympic Games in Sochi.

Yuri Smekalov’s choreographic miniatures Requiem for Narcissus and Parting have been performed in Europe and Asia.

2012 at the Bolshoi Theatre in Moscow saw the premiere of the two-act ballet Moidodyr (Wash ’Em Clean with choreography by Yuri Smekalov and music by Efrem Podgaits).

In May 2013 Yuri Smekalov appeared in a gala dedicated to the opening of the new Mariinsky Theatre; the programme for the evening included Yuri Smekalov’s version of Harald Lander’s ballet Études. In June the same year he participated in the project A Creative Workshop of Vladimir Vasiliev, held as part of the Plato Arts Festival in Voronezh where he presented the choreographic miniature Jan to music by Alexander Maev.

In 2016 staged Reinhold Glière's ballet The Bronze Horseman for the Mariinsky Theatre. In 2017 presented Éduard Deldevez’s Paquita (with music by Ludwig Minkus and Riccardo Drigo).

Yuri Smekalov works with the coach Alexei Mishin and he is involved in creating programmes for Russia’s figure skating team. In 2003–2004 he was the choreographer for Yevgeny Plyushchenko’s programmes and, in 2008–2009, he created the programmes Narcissus and The Hermit for figure skater Artur Gachinsky.