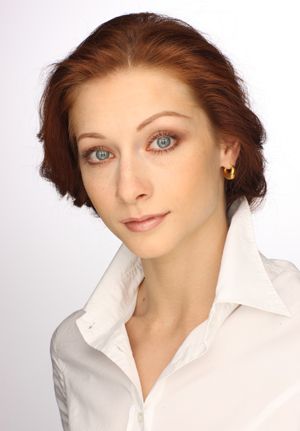 Ekaterina Kondaurova is a dancer of strong character. Not delicate, lacelike or porcelain-like, but etched in stone.

Tall, beautiful and with aristocratic facial features and a noble performing style, she has brilliantly danced the variations in La Bayadère, Paquita and Don Quixote. The particular chic of her performance, the art of instant improvisation, the ability to “give of herself” – a queen of the demimonde, perhaps, but still a queen! – have made Kondaurova the darling of the public.
Equally successful was her performance as the Angel of Death in Balanchine’s Serenade. A halo of mysticism accompanied her dance which was beautiful in every movement. Today she is, without a doubt, the most vivid individual among the Mariinsky Theatre’s young dancers.

This ballerina was created for Balanchine’s ballets – technically complex and choreographically fanciful – here she opens up fully both as a technically supreme dancer and as a subtle dramatic actress.

Graduated from the Vaganova Academy of Russian Ballet in 2001.

Joined the Mariinsky Ballet in 2001.

She was the first performer of the roles of Alma in Kirill Simonov’s ballet Glass Heart (2008), the Mare in Rodion Shchedrin’s ballet The Little Humpbacked Horse with choreography by Alexei Ratmansky (2009), the Soloist in Emil Faski’s ballet Simple Things (2010) and Aegina in the full-scale 2010 revival of the ballet Spartacus (2010) with choreography by Leonid Yakobson (1956), and the key roles in Sasha Waltz’ Le Sacre du printemps and Alexei Ratmansky’s Concerto DSCH.

Has toured with the Mariinsky Ballet to Great Britain, Germany, the Netherlands, Norway, China and the USA.