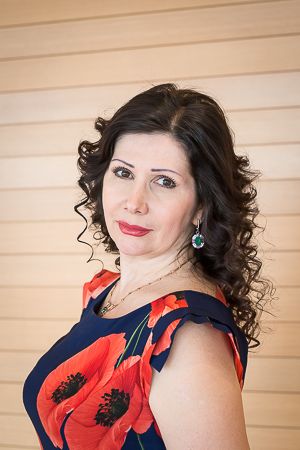 The main role was performed by soloist Elena Minina. Possessing a lyrical dramatic soprano, a bright personality and artistic talent she was able to capture the conflict and contrasting characteristics of the courtesan Violetta Valeri on the stage. She was able to convey through her artistry a fine psychological approach to the role.

True art, as we know, is born when the audience in the auditorium begins to empathise with the artist on the stage and that empathy in this production was linked to foremost of all to the performer of the main role Elena Minina who delighted the audience not only with her strong, beautiful soprano voice but with her dramatic abilities.

In 1989 she graduated from the Far Eastern State Academy of Arts having studied with Honoured Artist of Russia Professor Galina Alexeiko.

She took master classes from Professor of singing Ulrike Sonntag in the University of Music and Performing Arts (Stuttgart, Germany).

From 1993 to 2003 she worked as a lead soloist of the Pacific Symphony Orchestra and the Classical Opera Theatre.

Since 2003 she has been a soloist of the Primorsky Regional Philharmonia. In 2000 as part of the Original ensemble she presented Russian culture at the G8 summit in Okinawa (Japan).

She participated in the International Pacific Region Festival (Tokyo, 2005) and is a participant of the Far Eastern Spring Festival of Classical Music (2002-2016).
In 2013 she became a soloist of the Primorsky Opera and Ballet Theatre.
In 2016 she became a member of the Opera Company of the Primorsky Stage of the Mariinsky Theatre.