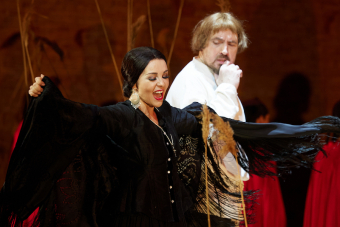 On January 19, 2023, The Enchanted Wanderer opera by Rodion Shchedrin will be performed on the Primorsky Stage of the Mariinsky Theatre, staged by Alexei Stepanyuk. The opera will be performed in Vladivostok for the first time.

The composer has defined the genre of The Enchanted Wanderer as a “concert opera”, making it similar to an oratorio. Three soloists play parts, at the same time telling the story of their own lives. The music is very multifaceted: it features the “plain Russian chant”, or “Znamenny Chant”, in the prologue and epilogue; the bell chimes in the culminations; the shepherd’s melodies and the stylization of village laments that Shchedrin could have heard in folklore expeditions; the gypsy romance.

Artistic Director of the Opera Company of the Primorsky Stage of the Mariinsky Theatre, Irina Soboleva, has been working with Rodion Shchedrin for many years and is Principal Concert Mistress of several of his major operas. She notes that despite the shortness of this opera piece, the characters are extremely vivid and their destinies are disclosed with an utmost expression.

“Rodion Shchedrin has mentioned more than once that for opera, the temperature of sensations should be much higher than normal, not 36.6, but 39.5 or even 40.0! Perhaps, The Enchanted Wanderer is written in a language unfamiliar to the audience, that is, there are no love duets or completed arias in this opera. This is music with a very high burning temperature. In December, Rodion Konstantinovich celebrated his 90th birthday. The anniversary was widely covered by the Mariinsky Theatre, where all the music created by the composer is performed. My cherished desire had been to connect this anniversary year with the Vladivostok Theatre, the Primorsky Stage. I hope that now the audience in Vladivostok will enjoy this premiere performance and appreciate it with pleasure”, said Irina Soboleva.

Yekaterina Sergeyeva and Oleg Sychov, the soloists of the Mariinsky Theatre who have for many years performed the main parts in The Enchanted Wanderer in St Petersburg, will take the stage in Vladivostok for the premiere performance, accompanied by the soloist with the Mariinsky Academy of Young Opera Singers Artem Melikhov. The parts are also rehearsed by soloists of the Primorsky Stage Opera Company: Tatiana Makarchuk, Natalia Yakimova, Sergei Pleshivtsev, Yevgeny Plekhanov, Ilya Astafurov and Mingiyan Odzhaev. Pavel Smelkov, Principal Conductor of the Primorsky Stage, will take the conductor’s console on the premiere night.