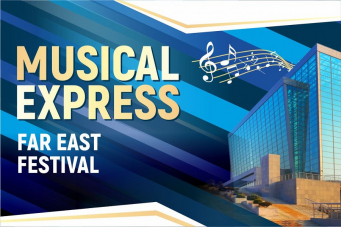 The purpose of the Musical Express Festival is to unite lovers of classical music and give an opportunity to the audience in different areas of the Far East to hear live musicians and singers of the Primorsky Stage of the Mariinsky Theatre.

On the Festival bill there are six programs among which there are vocal, symphonic and chorus concerts, stage operetta performances and opera soloists gala concerts. The audience will enjoy great compositions by Mozart, Schubert, Mendelssohn, Verdi, Rossini, Strauss, Tchaikovsky, Rimsky-Korsakov, Glazunov, Rachmaninoff, Sviridov, and many other composers.

Prizewinners at international competitions, leading singers of the Opera Company and members of the Mariinsky Orchestra of the Primorsky Stage will perform as soloists. The Chorus concerts will be conducted by Larisa Shveikovskaya, Principal Chorus Master. The baton will also be held by Anton Torbeev, Waleriy Trubin-Leonoff, Vitaly Shevelev and Pavel Smelkov, Principal Conductor of the Primorsky Stage of the Mariinsky Theatre.