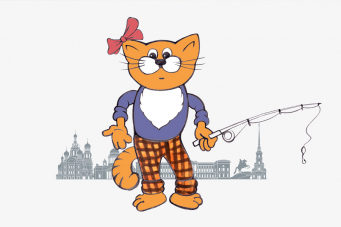 In October, as part of the program “Mariinsky – for children”, the Primorsky Stage of the Mariinsky Theatre will represent three opera premieres for the very youngest. They are Murych the Cat, Scenes from the Life of Nikolenka Irtenev and The Little Prince. These operas staged by Alexei Stepanyuk, Honored Artist of Russia, will be held in the Chamber Hall.

The libretto to Sergei Banevich’s opera Murych the Cat is written by Inga Bochanova. It is a story about a resourceful and somewhat boastful cat, who celebrates his birthday with his family and friends. The production is targeted at the youngest audiences and finds a keen response from both children and their parents. Sergei Banevich is rightly acclaimed as a classic of children’s music. Here are the composer’s own words: “As a professional musician I am convinced that classical music, indeed any music in general, makes a young person pull him or herself together and look at him or herself, because a child has a huge, interesting and spiritual world that is of no less importance than the spiritual world of an adult. True music can awaken that world”. The composer has an excellent understanding of the ways that young children perceive things and has an ability to compose accessible yet professional music for them.

Another one-act opera by Sergei Banevich that will be represented at the Primorsky Stage is Scenes from the Life of Nikolenka Irtenev after motifs of Leo Tolstoy’s autobiographical trilogy Childhood, Boyhood and Youth and biographical materials connected with the final days of the author’s life. This concert opera, just like Tolstoy’s book which inspired it, is aimed at both children and adults whose souls still burn with the “light of childhood”. It is a chamber work, an intimate story of the most precious, exciting and delicate stage of life. The opera is structured as a series of memories of the Narrator: the cinematic libretto by Sergei Vasiliev as if highlights separate episodes of Tolstoy’s narrative.

The Little Prince is the first opera written by the Rostov composer Leonid Klinichev especially for young audiences. “It is not by chance that this remarkable tale by Antoine de Saint-Exupéry has won world acclaim. Everyone has a dream. Someone dreams of meeting a fairy-tale prince, someone – of meeting amazing characters... The fairy-tale is narrated in the most basic language, with simple ideas that are immediately enchanting”, Leonid Klinichev said in an interview with Mariinsky FM internet radio. The libretto was written by Madina Klinicheva, the composer’s daughter, who transformed the text of the narrative into poetic verse. As well as any other work, The Little Prince contains several hidden semantic levels; their perception demands a certain life experience. Yet the main ideas find a response, even with the very youngest.