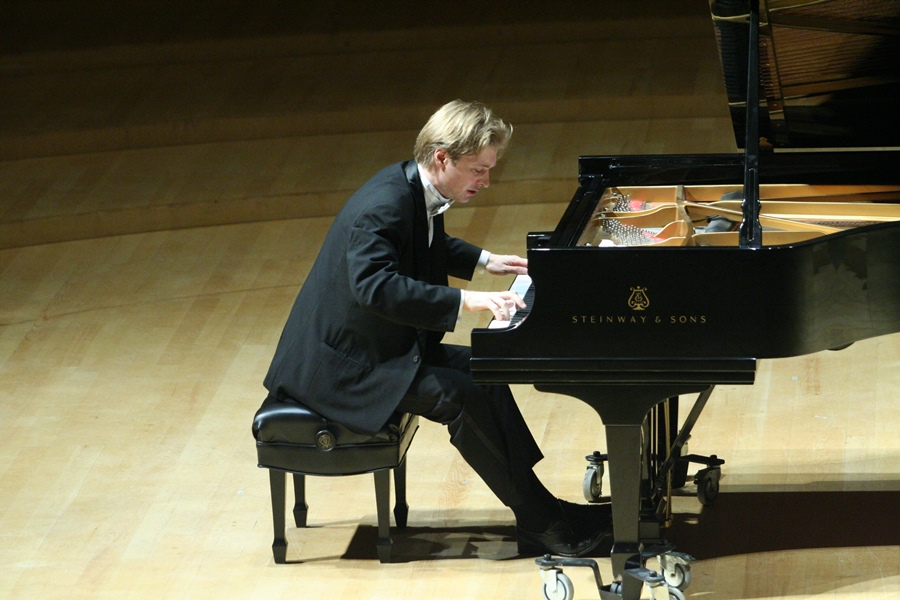 The barcarolle is a song of the gondoliers in Venice in the characteristically rocking rhythm that conveys the movement of a boat on the waves of the lagoon. This genre was extremely popular with the Romantic composers, and it took off in Russian music, starting with Glinka. Frédéric Chopin turned to the easily recognisable rhythm of the barcarole several times, in particular in his Second Ballade. But he wrote only one work with this word in the title.
Barcarole, Op. 60, was written in 1845–1846 and became one of the composer’s last major works alongside his Polonaise-Fantaisie and his Cello Sonata. It would be natural to expect something in the vein of nostalgic recollections of the distant past from this late work, the more so as it is in the rarely met tonality of F Sharp Major (which was normally used to embody ephemeral visions), but Chopin, quite the reverse, wrote very full-blooded music. The left hand plays the rocking rhythm and the right the songful melody, doubled now into third, now into sixth, and in terms of the volume of ornamentation in the Barcarolle Chopin cedes nothing to Liszt’s virtuoso works. Following several nostalgic moments in the central section of the reprise, the true apotheosis of the Barcarolle comes – it sounds triumphant in a way it had never done with any other composer.

An étude is a piece based on strictly defined academic techniques (this may be scale-like passages, triads, arrangements of octaves or double terzettos). In the 19th century many éttudes were composed, written to develop performance technique on all sorts of instruments and which had no independent artistic value. These pieces were written by such pianists as Muzio Clementi, Carl Czerny and the violinist Rodolphe Kreutzer. Chopin’s éttudes are not mere exercises, rather they are stunning concert pieces in which the technical complexities are not self-important. Although they do allow the performer’s mastery to dazzle – after all, the composer himself was an unsurpassed virtuoso! Chopin wrote two series of études (opuses 10 and 25); he started work on the first when still in Warsaw and completed it in Paris, which came to be his second homeland.

In December 1831 Robert Schumann anonymously published a short article in the Allgemeine Musikalische Zeitung newspaper. The article is notable as being the first appearance of the characters Florestan and Eusebius, who became Schumann's alter ego. However, its historical significance is not confined to that: it was this publication that featured the sacred phrase "Hats off, gentlemen! A genius is before you!", dedicated to the then little-known 20 year-old composer Frederic Chopin. For Chopin himself 1831 was the year that he moved to Paris, where he would gain world renown, and also the year of his tragic realisation of his isolation from his native Poland, where an uprising in October 1831 was brutally put down by Russian troops. In that same year Chopin wrote his first Scherzo in B minor for piano. The scherzo, which for the classical composers, particularly Beethoven, was part of a sonata, became for Chopin a genre in its own right, a kind of extensive musical poem, full of sombre, sinister images.

Yegor Kovalevsky A masterpiece from start to finish;
a masterpiece of taste, melody and expression.
A. Ulybyshev

The judgement on Beethoven’s Pathétique sonata in the above epigraph came from Alexander Dmitrievich Ulybyshev, a renowned Mozart expert and author of The New Biography of Mozart. This admission comes at a price: in his book Beethoven, His Critics and Commentators (Leipzig, 1857; published in French), the author pays due tribute to Beethoven as one of the greatest composers, while he criticises many of his works for their “disharmony” in contrast with Mozart’s “absolute perfection”.
The Sonata in C Minor, Op. 13 (1798–1799), is dedicated to Prince Karl Lichnowsky; the composer himself described it as Die Grosse Pathétique Sonata. Following his great predecessors, Beethoven (he once said he “stood upon the shoulders of giants”) developed the traditions of Gluck, Mozart and Haydn, bringing something new that answered the call of the age, something of the heroic. “Music became human, it became a human being, a man of the new century – herein lies the secret of this revolution,” Romain Rolland was to write over one century later. He includes the testimony of Beethoven’s youngest contemporary, the composer and pianist Ignaz Moscheles, who recounted that “passions for and against the Pathétique Sonata flared up as if concerning some new opera.” Classically oriented critics accused Beethoven “of constantly searching for fantastical modulations, of systematic repugnance to natural transitions, of a terrible tangled heap of difficulties so that like it or not, one loses one’s patience…” (from Die Allgemeine Musikzeitung, which was published in Leipzig).
Audiences today who know the Pathétique Sonata almost from their school years (and many of them have attempted it with their own timid fingers) may be astonished at such inveterate views, but – alas! – such are the timeless dialectics of old and new in art! It was not by chance that Romain Rolland wrote of the heroic rebelliousness of the young Beethoven that “From the romanticism of his style, the wigs would stand on end.” The majestic and tragic declamation, the passionate and fiery pathos of the first section, the chaste lyricism of the elevated, melodious Adagio, the impetuous yet refined plastique of the final Rondo… Today the Pathétique Sonata, much loved by pianists and audiences alike, is one of the jewels in the crown of the philharmonic repertoire; let it be said once more – “a masterpiece from start to finish”.